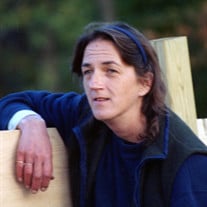 Mary Elizabeth (Bower) Gavitt, 54, passed away on May 9, at her home in Muncy surrounded by her loved ones, including her dogs, Dixie and Bess. Mary was born July 14, 1962 to late Donald E. and A. Elizabeth (Gross) Bower and raised in the country near Watsontown. Like her Grandmother Gross, Mary had a passion for animals and the family home housed a menagerie of pets. Mary was an accomplished equestrian, riding her Tennessee Walkers, Encore and Scout. Mary was a social member of the Turbotville VFW Post # 8206. After her graduation from Warrior Run High School in 1980, Mary enrolled at Harcum College in Bryn Mawr, PA. After her sophomore year, Mary had the opportunity to gain an internship at The University of Pennsylvania’s prestigious New Bolton Center in Chester County, Pennsylvania. The New Bolton Center, an academic large animal hospital, afforded Mary the opportunity to study at one of the busiest large animal teaching veterinary clinics in the nation. In 1991 Mary was offered a position at Bucknell University in their Animal Behavior Laboratory. For 26 years, until the time of her death, Mary cared for Bucknell’s animals; specifically the primates living there. She was extremely loyal, thoughtful, and concerned herself with making the animals’ lives happy ones. In addition Mary was instrumental in training students how to work with those intelligent creatures and was inevitably responsible for teaching the young people some life-lessons along the way. On May 26, 2009, Bucknell’s President, Brian C. Mitchell, presented Mary with the John F. Zeller Award for Staff Excellence for her dedication and expertise as head animal caretaker and Employee of the Year. An additional award for 26 Years of Outstanding Service and Dedication to Primates was presented to her just prior to her death. In addition to her parents, Mary was preceded in death by her first husband, Kevin W. Gavitt, on June 14, 1998 and her second husband, Chester C. Swank, Jr. on September 16, 2015. Surviving is her son, Adam W. Gavitt, (Amber Wagner) of Unityville; a step son, Chester C. (Katlyn) Swank, III, of Yeagertown; a step daughter; five grandchildren; a sister, Phyllis Williamson of Watsontown; an aunt, Sally Bower Fairchild of Wayne; and a nephew, Eric Harpster, of Northumberland. A memorial service will be held at 7 p.m. on Friday, May 19, at McCarty-Thomas Funeral Home, 557 E. Water Street, Hughesville, with Chaplain Robert D. Barner, officiating. Interment will be private at the convenience of the family. Friends may call on Friday from 5 to 7 p.m. at the funeral home. In lieu of flowers, memorial contributions may be made in Mary’s name the Animal Behavior Program, c/o Professor Peter Judge, 1 Dent Drive, Bucknell University, Lewisburg, PA 17837. Expressions of sympathy may be sent to the family at www.mccartythomas.com

Mary Elizabeth (Bower) Gavitt, 54, passed away on May 9, at her home in Muncy surrounded by her loved ones, including her dogs, Dixie and Bess. Mary was born July 14, 1962 to late Donald E. and A. Elizabeth (Gross) Bower and raised in the country... View Obituary & Service Information

The family of Mary E. Gavitt created this Life Tributes page to make it easy to share your memories.

Send flowers to the Gavitt family.