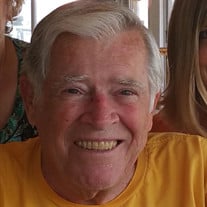 Marshall W. Hull, 78, of Lewis Twp., Muncy, died Thursday, November 3, 2016 at home. Born February 18, 1938 in Muncy, he was a son of the late Alem P. and Constance (Turner) Hull. Marshall married Connie L. Hoover and recently celebrated their 48th wedding anniversary on June 1, 2016. Marshall attended Montgomery area schools and the Williamsport Technical Institute, where he received a degree in Electrical Technology in 1956. Prior to his retirement, Marshall owned and operated Pine View Engine Shop, and was co-owner of Triple H Enterprises, which included three area bowling alleys. He was also a skilled electrician, plumber, and carpenter. Marshall was a member of Christ Lutheran Church, Montgomery, and a US Army Veteran. Marshall loved bowling, fishing, coin collecting, antique cars, dragons, frogs, anything orange, old western movies, cheeseburgers, and most of all, his family. Surviving in addition to his wife Connie are a daughter, Tracy L. (Jason) Lowther of Bel Air, MD; a son, Mark A. (Jenny) Hull of Montgomery; two grandchildren; two great grandchildren; and several nieces and nephews. In addition to his parents, he was preceded in death by two brothers, Alem "Sonny" Hull and James Hull, and a nephew, Eric Hull. A service celebrating Marshall’s life will be held 12 p.m. on Friday, November 11 at McCarty-Thomas Funeral Home, 557 E. Water Street, Hughesville, with Pastor's Mark And Jenny Hull officiating. The family will receive friends from 10:30 a.m. to 12 p.m. at the funeral home prior to services. Memorial contributions may be made in Marshall’s name to Family Promise of Lycoming County, 635 Hepburn Street, Williamsport, PA 17701, or to L.A.P.S., 195 Phillips Park Drive, S. Williamsport, PA 17702, or to the Alzheimers Association at www.alz.org. Expressions of sympathy may be sent to the family at www.mccartythomas.com

The family of Mr. Marshall W. Hull created this Life Tributes page to make it easy to share your memories.

Send flowers to the Hull family.