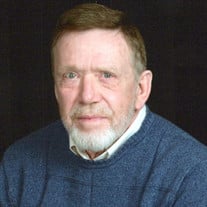 Mark Andrews, 73, of New Columbia, died Tuesday, July 30, 2019 at Geisinger Medical Center. Born August 22, 1945 in Eagles Mere, he was a son of the late Dene and Grace (Smeltzer) Andrews. Mark was a graduate of St. Basil's High School, Class of 1963, and served his country honorably in the U.S. Air Force during the Vietnam War. While in the Air Force he was a Dog Handler, an assignment he was very proud of. After returning home from the military, he graduated with honors in 1973 from Husson College in Bangor, Maine with a degree in Accounting. Mark owned and operated Wilder Business Services for three decades with his best friend, Bryan Moody. He enjoyed flying air planes, playing the guitar, riding his motorcycle, fishing, and hunting. Mark was also a Boston sports fan and loved the Red Sox, Bruin, and Celtic. He was an avid reader and enjoyed traveling and spending time with his family, especially his grandchildren. Surviving are a daughter, Sheilla M. (Jeremy) Bachelder of Grantham, NH; a son, Mark L. (Courtney) Andrews of Benson, NC; five sisters, Bernadette Andrews, Pat Sadowski, Beth Briere, Demy Sapeinza and Jennifer Deters; two brothers, Matthew Andrews and Eric Andrews; three grandchildren, Catie P. Bachelder, Daniel M. Bachelder and Tyler B. Andrews; his significant other, Carol A. Rechel of Muncy; and a former spouse, Nancy R. Andrews of Wilder, VT. In addition to his parents, Mark was preceded in death by two sisters, Gay Gering and Lynn Andrews; four brothers, Mick Andrews, Luke Andrews, Pete Andrews and Dene Andrews; and his best friend, Bryan Moody. Friends may call from 11 a.m. to 12 p.m. Monday, August 5, at the McCarty-Thomas Funeral Home, 557 E. Water St, Hughesville. Burial will be held privately at the convenience of the family in Eagles Mere Cemetery. Expressions of sympathy may be sent to the family at www.mccartythomas.com.

The family of Mark Andrews created this Life Tributes page to make it easy to share your memories.

Send flowers to the Andrews family.