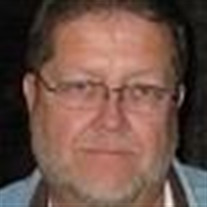 Lynn Lamar Wilson, 63, of Muncy, passed away on Friday, April 26, 2019 at the Williamsport Regional Medical Center. Lynn was the husband of Patricia A. Milheim Wilson with whom he shared 43 years of marriage. He was born in his Grandparent’s home in Hughesville on November 29, 1955 and was the son of the late Arthur Dale and Lila M. Fox Wilson. Immediately after high school, Lynn took a position with IA Construction where he worked supplying the paving crews as a mixer operator. Later, he launched a career at United Parcel Service where he spent many years A true classic car enthusiast, he had a passion for classic automobiles—especially Chrysler Products, and owned a multitude of vehicles that he personally restored. He could often be found at the Carlisle, PA swap meet, and also offered a lot of his time and knowledge to the Eagles Mere Auto Museum. He is survived by his wife Patricia, a son Brad Lamar (Heather) Wilson of Hughesville, two brothers Larry D. (Verna) Wilson of Montoursville, Steven C. (Laurie) Wilson of Muncy, his two grandsons, Jayden M. and Brenden L. Wilson, and several nieces and nephews. Not only were classic cars an interest, but his adoration of his grandsons and the time he spent with them at ball games and riding around in his classic cars was a true source of enjoyment in his life. In addition to his parents, Lynn is predeceased by four brothers; Ronald L. Wilson, Dale E. Wilson, Gary D. Wilson and Roger A. Wilson. In lieu of a memorial service Lynn’s family would prefer that all of his friends get their classic cars on the road, grab a couple gears, and do a healthy burnout. Arrangements have been entrusted to McCarty~Thomas Funeral Home, Hughesville. Expressions of sympathy may be sent to the family at www.mccartythomas.com.

Lynn Lamar Wilson, 63, of Muncy, passed away on Friday, April 26, 2019 at the Williamsport Regional Medical Center. Lynn was the husband of Patricia A. Milheim Wilson with whom he shared 43 years of marriage. He was born in his Grandparent&#8217;s... View Obituary & Service Information

The family of Lynn L. Wilson created this Life Tributes page to make it easy to share your memories.

Lynn Lamar Wilson, 63, of Muncy, passed away on Friday, April...

Send flowers to the Wilson family.