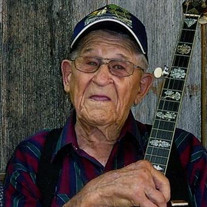 Linwood S. “Lenny” Houseknecht, 91, of Muncy Valley, died Friday, February 16, 2018, at Skilled Nursing & Rehabilitation Center, Muncy. Lenny was born November 24, 1926 in Hughesville, a son of the late George W. and Vasta M. (Hill) Houseknecht. He and his wife, the former Joyce A. (Phillips) Barto, would have celebrated 43 years of marriage on June 28, 2018. Lenny served his country honorably in the U.S. Army during World War II. During his time abroad he spent a great deal of time in the deserts of Egypt. After returning from the war Lenny held various jobs, including farming, raising Christmas trees, and would eventually retire from the former Anton Waldmann, Hughesville, after having worked there for over 30 years. Music was Lenny’s passion, especially bluegrass. He played in several area bands over the years and was currently a member of The Greenwood Valley Boys and could often be found playing at Jersey Town Jam. He was an outdoorsman and avid hunter and trapper who also enjoyed snowmobiling, square dancing and his dogs. He was a member of the Hemlock Grove United Methodist Church, Rocky Mountain Elk Federation, North American Hunting Club, Strawbridge Fishing Club, and a Life Member of North Mountain Sportsmen Association and the NRA. Lenny was a former member of the Odd Fellows. Surviving, in addition to his wife, Joyce A. (Phillips) Barto Houseknecht, are a sister, Barbara Houseknecht of Picture Rocks; a step-daughter, Barbara A. (Roy) Meyer of Muncy Valley; three step-sons, Richard L. (Janet) Barto of Muncy, Kenneth L. (Kim) Barto of Muncy Valley, and Joseph L. (Linda) Barto of Muncy Valley; a nephew, Fred (Bonnie) Houseknecht of Picture Rocks; five step-grandchildren; and 5 step-great-grandchildren. In addition to his parents, Lenny was preceded in death by a brother, Raymond Houseknecht. Funeral services will be held 11 a.m. Saturday, February 24, at McCarty-Thomas Funeral Home, 557 E. Water Street, Hughesville, with Pastor Zachary Woods officiating. Burial will follow in Franklin "Stone Heap" Cemetery, Unityville. Friends may call from 10 to 11 a.m. Saturday at the funeral home. The family will provide the flowers and suggest memorial contributions to the Hemlock Grove United Methodist Church, P.O. Box 185, Muncy Valley, PA 17758. Expressions of sympathy may be sent to the family at www.mccartythomas.com.

The family of Linwood S. Houseknecht created this Life Tributes page to make it easy to share your memories.

Send flowers to the Houseknecht family.