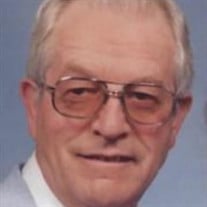 Lewis Wellington Secules died December 4, 2020 of COVID-19 after a months-long stay at Muncy Place. Most of the time Lewis Secules was a man of few words. But sitting around the table after dinner, if you got him started on a story from his earlier days, you could count on a full regaling. He told stories of growing up on a farm on North Mountain, where he was born in 1926, to Grover and Myra Secules. Stories of walking miles to school, plowing with a team of horses from age five, sledding in winter, and helping make maple syrup. Shortly before the 1936 flood, the family moved to farm in the Black Hole Valley; he told the story of crossing the damaged Muncy bridge with his father leading a herd of cattle. He graduated from Muncy High School in 1944. As soon as he turned 18, he was drafted into the Navy even though he couldn’t swim before he learned in boot camp and radio school at Sampson Naval Base. He didn’t talk much about his time at a supply base in the Philippines at the end of World War II. A member of the American Legion, he was also a member of the Flight 93 Memorial in later years. He enjoyed talking about courting his wife of 72 years, Maxine Eck Secules. There were tales from several years managing a GLF petroleum plant in Dundee, NY, before they moved back to Pennsylvania to be closer to extended family. Most people in the area probably know him best as the owner, with Maxine, of Secules Custom Kitchens in Hughesville. After learning to design and estimate kitchen remodels at Sears, Roebuck, & Co., he decided to set up his own business to see the process through from design to installation. He hired carpenters, who taught him the installation phase and worked with him for two decades. Hughesville is where he and Maxine raised their five children and where he was Justice of the Peace. As chair of the building committee at Brick Church (St. John’s Lutheran) in Clinton Township, he led the fund drive by installing the kitchen with his son, Tom. He was very active in the church as trustee and Sunday School superintendent. In later years, he moved back to North Mountain, building a house on the property where his mother had been raised. There he served in similar roles at Franklin Fairview United Methodist Church and kept the church and parsonage in good shape. Until their mid 80s, he and Maxine delivered Meals on Wheels to people in the area who were often decades younger. Over the years he became a master woodworker and artisan, creating many treasured items for family and friends. In his later years, he was especially proud of the canes he made from just the right small sapling with a root at just the right angle for the handle. He is survived by a large and loving family: his wife, Maxine; two sisters, Martha Fenstermacher and Shirley Shaner; five children, Teresa (Cary Lepzelter), Tom (Karen), Dale (Emily), Denise Lorson (Bud), and Mike (Jody); fourteen grandchildren and seventeen great-grandchildren. Two other family members passed away several years ago--his sister, Helen Burk, and grandson, Christopher Secules. There will be a graveside service for local family members, with a celebration of his life to be held when it is safe for far-flung family members to travel again. In lieu of flowers, the family asks for donations to Susquehanna Health Foundation, 1001 Grampian Blvd., Williamsport, PA 17701 to support Muncy Place or to the East Lycoming Education Foundation, designated to the Christopher T. Secules Memorial Scholarship, East Lycoming School District, 349 Cemetery St., Hughesville, PA 17737. Arrangements have been entrusted to McCarty~Thomas Funeral Home, Hughesville. Expressions of sympathy may be sent to the family at www.mccartythomas.com.

Lewis Wellington Secules died December 4, 2020 of COVID-19 after a months-long stay at Muncy Place. Most of the time Lewis Secules was a man of few words. But sitting around the table after dinner, if you got him started on a story from his... View Obituary & Service Information

The family of Lewis W. Secules created this Life Tributes page to make it easy to share your memories.

Send flowers to the Secules family.