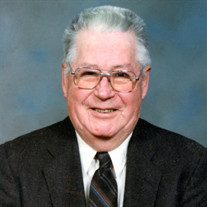 Lester E. “Les” Erdman, 96, of Muncy, died Friday, September 1, 2017 at Skilled Nursing & Rehabilitation Center in Muncy. Born December 23, 1920 in Upper Mahoning Twp., he was a son of the late William H. and Jenny (Mattern) Erdman. His wife of 67 years, the former Henrietta Smith, preceded him in death on September 20, 2010. Les enjoyed hunting, fishing, gardening, and raising raspberries. He is survived by a daughter, Carol (Bob) Esten of Pennsburg; a son, Vern (Elaine) Erdman of Muncy; two sisters, Violet Hoffman and Daisy Drumheller; a brother, Marlin Erdman; five grandchildren; and numerous great-grandchildren and great-great grandchildren. In addition to his wife and parents, he was preceded in death by a daughter, Leah Tice; two brothers, Ernest and Paul Erdman; and five sisters, Margaret Kessler, Ruth Coleman, Arlene Bordner, Gertie Stein, and Dorothy Wolfgang; and a grandson, Tim Wilson A visitation will be held from 6 to 8 p.m. Friday, September 8th, at McCarty-Thomas Funeral Home, 557 E. Water St., Hughesville. In addition, a memorial service will be held 11 a.m. Saturday, September 9th, at the Salem Church of Rough and Ready, 11 Church Rd., Klingerstown, PA 17941. Friends may call from 10 to 11 a.m., one hour prior to the service. There will also be a meal provided, following the burial at the church. Expressions of sympathy may be sent to the family at www.mccartythomas.com.

The family of Lester E. "Les" Erdman created this Life Tributes page to make it easy to share your memories.

Send flowers to the Erdman family.