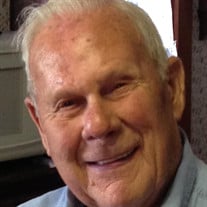 L. Dale Myers, 88, of Muncy Valley, died Tuesday, January 15, 2019 at UPMC Williamsport. Born January 27, 1930 in Muncy Valley, he was a son of the late Stanley D. and Tressie (George) Myers. He and his wife, the former Kathryn M. Hess, celebrated 64 years of marriage on June 19, 2018. Dale served his country honorably in the U.S. Army during the Korean War, and was a member of the American Legion Post 601, Sonestown. He gave selflessly of himself to his community serving as a Davidson Township Supervisor for many years, a forest fire warden for over 50 years, and as a charter member of the Muncy Valley Area Vol. Fire Company where he served as fire chief and numerous other positions throughout his 67 years of service. Dale also assisted his father and brother as a mechanic at Myers’ Garage and was a school bus contractor for Sullivan County School District for many years. Dale had a passion for collecting and restoring antique cars and was most proud of his 1928 Cadillac. He was a member of the Antique Automobile Clubs of America and the Strawbridge Fishing Club. Surviving, in addition to his wife, are a daughter, Debra A. (Dennis "Dutch") Bogaczyk of Williamsport; two sons, Steve D. (Dawn) Myers and Linwood F. (Maureen) Myers, both of Muncy Valley; two sisters, Mary (Robert) Eberlin, and Kathy (Tom) Robbins, both of Muncy Valley; a brother, Chester (Irene) Myers of Muncy Valley; and seven grandchildren, Tyler and Ryan Bogaczyk, Samantha Myers, Chelsea Blair, and Danielle, Patrick, and Anna Myers. In addition to his parents, Dale was preceded in death by a son, Daniel M. Myers; and a brother, Edgar Myers. Funeral services will be held 10 a.m. Tuesday, January 22, at McCarty-Thomas Funeral Home, 557 E. Water Street, Hughesville, with Pastor Zachary Woods officiating. Burial will follow in Franklin "Stone Heap" Cemetery, Unityville, with graveside military honors accorded by combined veteran’s organizations. Friends may call from 6 to 8 p.m. Monday, January 21, at the funeral home. The family will provide the flowers and suggest memorial contributions to the Muncy Valley Area Vol. Fire Comp., P.O. Box 9, Muncy Valley, PA 17758. Expressions of sympathy may be sent to the family at www.mccartythomas.com.

The family of L. Dale Myers created this Life Tributes page to make it easy to share your memories.