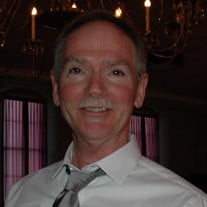 Justin L. Soden, 62, of Clarksville, TN died Tuesday, August 14, 2018 in Laceyville, PA. He married Kathleen A. (Bohensky) Soden on May 4, 1985. Born December 11, 1955 in Susquehanna, he was a son of the late Rexford G. and Marie I. (Smith) Soden. Justin was a graduate of Sullivan County High School, class of 1973, and a graduate of Williamsport Area Community College, where he received a degree in Electrical Engineering. He was employed at I.B.M., Owego for several years, and was recently employed by Lockheed Martin, also of Owego, NY. Justin was a member of Immaculate Heart of Mary Parish, Dushore, and Immaculate Conception Church, Clarksville, TN. Justin served in the U.S. Army during Vietnam with the 82nd Airborne Division of Ft. Bragg He was a member of the American Legion of Oak Grove, KY, White Ash Land Association, and the National Wild Turkey Association. He loved the outdoors, especially hunting and fishing. He enjoyed good times fishing with family at the cottage in Laceyville. In addition to his wife Kathleen, he is survived by a daughter Brianna M. Soden, of Knoxville, TN; a son, Trevor W. and fiancé Aubree Thomas, of Nashville, TN’; a brother, Joe Soden of Mildred; two sisters, Rosemary (Carmen) Cosentino, of Susquehanna, and Lorraine (Mark) Zabitz of Tyrone, and several nieces and nephews. In addition to his parents, Justin was preceded in death by three brothers, Gerald J., Steven F., and Vincent E. Soden; a niece Jessica J. Soden Pedro; and a nephew Michael Cosentino. A memorial mass will be celebrated at 10:30 AM on Monday, August 20 at St. Francis of Assisi Church, St. Francis Drive, Mildred, PA, with Pastor Richard Rojas officiating. Visitation will be from 3 to 5 P.M. on Sunday, August 19, at McCarty-Thomas Funeral Home, 119 Carpenter Street, Dushore. Members of the McDermott Post #453 American Legion, and other Legion Members are asked to assemble and pass and review at 4 P.M. at the funeral home on Sunday. Memorial contributions may be made in Justin’s name to a local charity of the donor’s choice. Expressions of sympathy may be sent to the family at www.mccartythomas.com

The family of Justin L. Soden created this Life Tributes page to make it easy to share your memories.

Customized sympathy cards. Mailed for you.