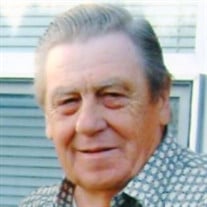 Judson Dan Benjamin, 75, of Overton, passed away Wednesday, October 31, 2018 at home. Jud was born on September 10, 1943, the son of Grant and Edna Benjamin, of South Branch. Jud was a graduate of Towanda High School, Class of 1962. On June 14, 1963, Jud married Carol A. Ayers of Overton. After marrying and moving to Sullivan County, he worked at various sawmills, Sylvania and then landed a job as a lineman for Sullivan County REC, Inc. where he worked until his retirement in 2008. In 1979, Jud moved his family into a log home that he constructed himself with little help except for calling Pedro's in to get the shingles on the day before the snow started to fly that year. Jud attended East Forks Community Church and was a part of the group that was instrumental in the restoration and reopening of the church. After retirement in 2010, Jud went on a mission trip to Haiti with an area church group. While there, he was able to meet a child that he and Carol had sponsored for 10 years through Children's Life Line. Jud was an avid outdoorsman hunting, fishing and gardening. He participated in these activities with his daughters and instilled in them a love for nature that will carry on. When his daughters were young, he would pull in the driveway after a long day of working with a wild turkey tucked under his arm or maybe a baby woodchuck or raccoon in the back or a salamander or a caterpillar in his lunchbox to show them. Jud enjoyed time spent with his family. Those who knew Jud knew him as a jokester. Sometimes, whether the situation warranted it or not. Jud spent most days outside, with his little dog, Toby, puttering about taking care of his chickens and turkeys, which he hatched out and enjoyed raising. He also had alpacas and llamas for a time. Due to a failing heart and a recent lung cancer diagnosis, he was slowing down but still insistent on getting out and doing what he liked which he did up until the minute of his passing. Surviving are his wife of 55 years, Carol A. Benjamin; two daughters, Darla (Paul) Treaster of Dushore and Kay (Robert) Wettlaufer of Overton; two granddaughters, Tamara (Joshua) Heess of Shunk and Elle (Derek Farrell) Rowe of Overton; a great grandson, Joshua Heess, Jr.; and two great granddaughters, Adalyn Heess and Madison Rowe; a sister, Nelda Lee of New Albany and his twin sister, Judith Hatch of New Albany; a brother-in-law, Edward Ayers of Dushore; and numerous nieces and nephews. In addition to his parents, Jud was preceded in death by a sister, Daisy Benjamin of New Albany; a brother-in-law, Walter Lee of New Albany; and a nephew, Derwin Kim Lee of New Albany. Funeral services will be held 11 a.m. Monday, November 5, at McCarty-Thomas Funeral Home, 119 Carpenter St., Dushore with Pastor Gregory L. Cole officiating. Burial will follow in East Forks Union Cemetery. Friends may call from 10 to 11 a.m. Monday at the funeral home. Flowers are welcome; however, memorial contributions may also be made to the Bradford County Humane Society, PO Box 179, Ulster, PA 18850. Expressions of sympathy may be sent to the family at www.mccartythomas.com.

Judson Dan Benjamin, 75, of Overton, passed away Wednesday, October 31, 2018 at home. Jud was born on September 10, 1943, the son of Grant and Edna Benjamin, of South Branch. Jud was a graduate of Towanda High School, Class of 1962. On June... View Obituary & Service Information

The family of Judson Dan Benjamin created this Life Tributes page to make it easy to share your memories.

Send flowers to the Benjamin family.