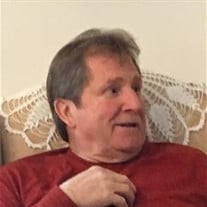 Joseph Wayne Walters, 70, of Hughesville, died Wednesday, January 2, 2019 at Geisinger Medical Center, Danville, surrounded by his family. Born July 17, 1948 in Hughesville, he was a son of the late Donald Britton and Emma Marie (Clark) Walters. Joe served his country honorably in the U.S. Marines during the Vietnam War, and was a member of the Muncy VFW and the American Legion Post 35, Hughesville. He retired in 2010 from Springs Window Fashions, Montgomery, after having worked there for over 20 years. Following his retirement Joe volunteered at UPMC Muncy for several years. He was a proud grandfather and great-grandfather who enjoyed spending time with his family. Joe also enjoyed riding motorcycles, traveling, spending time in the outdoors, and maintaining his collection of cars. Surviving are a daughter, Shelia M. Barto of Hughesville; three sisters, Shirley M. Houseknecht of Picture Rocks, Brenda L. (Keith) Harer of Montgomery, and Doris J. (Gary) Gorg of Muncy; two brothers, Robert S. (Trudy) Walters and Thomas J. Walters, both of Hughesville; two granddaughters, Brittney D. (Thomas) Dent, and Ariel F. (Dakota Burke) Barto; a great-grandson, Leo M. Burke; and his significant other of 15 years, Vicki K. Corbin of Hughesville. In addition to his parents, Joe was preceded in death by a sister and five brothers. Funeral services will be held 10 a.m. Tuesday, January 8, at McCarty-Thomas Funeral Home, 557 E. Water Street, Hughesville, with Rev. Max L. Walters Jr. officiating. Burial will follow in Pleasant Hill Cemetery, Hughesville, with graveside military honors accorded by combined veteran’s organizations. Friends may call from 6 to 8 p.m. Monday, January 7, at the funeral home. Flowers are welcome; however, memorial contributions may be made to the American Heart Association at www.heart.org or the American Cancer Society at www.cancer.org. Expressions of sympathy may be sent to the family at www.mccartythomas.com.

The family of Joseph Wayne Walters created this Life Tributes page to make it easy to share your memories.

Send flowers to the Walters family.