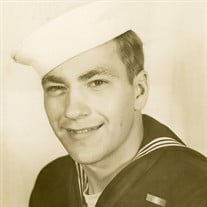 Joseph P. “Joe” Markley, 79, of Hughesville went to be with the Lord, Sunday, March 4, 2018 at The Gatehouse at Divine Providence Hospital. He is the husband of Arlene F. (Dickinson) Markley and were married on March 20, 1959. Born September 20, 1938, in Williamsport, he is the son of the late Francis R.A. and Alma M. (Bachman) Markley. He attended several area schools prior to entering the U.S. Navy Seabees, where he served for four years, mainly in the South Pacific. Joe was a carpenter/contractor, prior to working as a corrections officer at the SCI-Muncy, from where he retired. He was a lifetime member of the NRA and an avid outdoor sportsman who enjoyed hunting, fishing, and camping. Joe was a prolific reader of all subjects, especially of history. He was a talented woodworker and a self-taught artist of mainly pencil drawings. Joe first met his wife while stationed at Brunswick, Maine, and enjoyed traveling back to Maine with his family for both the beautiful seacoast and the seafood. He cherished spending time with his family, especially his grandchildren and great-grandchildren who called him “Poppy.” Surviving in addition to his wife Arlene are four daughters, Elizabeth D. (Michael) Mingle of Hughesville, Bonnilyn Jo Akers of Hughesville, Amy L. (Dan) Gardner of Hughesville, and Jenifer R. Markley of Hughesville; seven grandchildren; two step grandchildren; eight great-grandchildren, and one step great-grandchild; two sisters, Gladys Winder of Orlando, FL and Charlotte Dohl of Turbotville. In addition to his parents, he was preceded in death by two brothers, Richard and John Markley. Funeral services will be at 11 a.m. on Friday, March 9 at McCarty-Thomas Funeral Home, 557 E. Water Street, Hughesville, with Pastor Robert J. McKenzie officiating. Private interment will follow with graveside military honors by combined veteran’s organizations. Visitation will be Friday, 10 to 11 a.m. at the funeral home. Expressions of sympathy may be sent to the family at www.mccartythomas.com

The family of Joseph P. Markley created this Life Tributes page to make it easy to share your memories.

Send flowers to the Markley family.