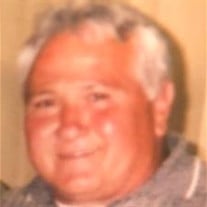 Joseph R. “Joe” Allar, 71, of Muncy, and formerly of Hughesville, died Thursday, January 9, 2020 at the Gatehouse. Born in Queens, NY, he was the son of Ralph and Elvira (Florio) Allar. Joe and his wife, the former Regina "Jean" Tyson, celebrated 50 years of marriage on April 19, 2019. Joe was a 1966 graduate of East Islip High School of East Islip, New York. He enlisted in the U.S. Navy in July of 1966 and served honorably until October of 1969 during the Vietnam Era. Joe worked for C&P Telephone Company in Washington, DC. Upon moving to Pennsylvania, he worked for J&L Steel for several years. In May of 1978 he became an Allstate Insurance Agent until retiring in April of 2000. Joe and his wife enjoyed traveling in their RV, especially spending winters in Florida. He enjoyed time spent with family and friends. He was a “Jack of all trades”. Joe coached Hughesville AYSO Soccer for several years. His laugh, wit and ability to talk will be greatly missed. Surviving, in addition to his wife, are a son, Michael A. PHD (Jayme) Allar of Northumberland, PA; two brothers, Thomas A. (Millie) Allar of Islandia, NY, and Mark (Sandra Folk) Allar of Huntersville, PA; two brothers-in-law, Gregory (Geraldine) Tyson of Bethlehem, PA, Kevin Tyson of Oswego, NY; two grandsons, Zachary and Nathaniel; and several nieces and nephews. Services will be private and at the convenience of the family. Interment will be held in Indiantown Gap National Cemetery, Annville, PA. Memorial contributions may be made to Susquehanna Home Care and Hospice Services or The Gatehouse, 1100 Grampian Blvd, Williamsport, PA 17701. Arrangements have been entrusted to the McCarty-Thomas Funeral Home, Hughesville. Expressions of sympathy may be sent to the family at www.mccartythomas.com.

The family of Joseph R. Allar created this Life Tributes page to make it easy to share your memories.

Send flowers to the Allar family.