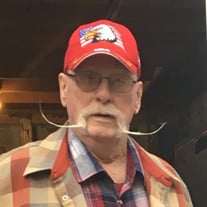 John D. “Jack” McCusker Sr., 85, of Dushore, died Wednesday, December 11, 2019 at his home. Born November 13, 1934 in West Chester, he was a son of the late John J. and Helen (Chalfonte) McCusker. He and his wife, the former Loyce V. Hollins, celebrated 64 years of marriage on May 21, 2019. Jack served his country honorably in the U.S. Army during the Vietnam War. He enjoyed woodworking, carpentry work, hunting and fishing. Jack also enjoyed playing the harmonica, traveling and spending time with his family, especially their annual gathering. Surviving, in addition to his wife, are two daughters, Kathleen J. Horvat of Mountville and Kimberly M. (Rick) Hugo of New Albany; two sons, John D. "Dave" McCusker Jr. of York and Jeffrey D. McCusker of Lansdale; a sister, Arlene (Bob Eachus) Lambert of Coatesville; 12 grandchildren; 24 great-grandchildren; one great-great-grandchild; and his faithful dog Chance. In addition to his parents, Jack was preceded in death by a daughter, Tammy L. Barto; a son, Daniel M. McCusker; and a sister, Johann McCusker. Funeral services will be held privately at the convenience of the family. Arrangements have been entrusted to the McCarty-Thomas Funeral Home, Dushore. Expressions of sympathy may be sent to the family at www.mccartythomas.com.

The family of John D. "Jack" McCusker Sr. created this Life Tributes page to make it easy to share your memories.

Send flowers to the McCusker family.