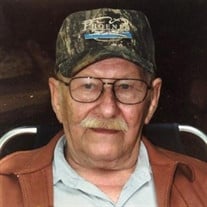 John Krysik, 88, of Hughesville, died Friday, March 6, 2020 at The Gatehouse. Born June 22, 1931 in Creighton, PA, he was a son of the late Joseph and Mary Krysik. His wife of 61 years, the former Mary Lou Odon, preceded him in death on December 28, 2015. John’s service to his country began at the early age of 17, joining the Army on August 13, 1948. After completing his basic training at Fort Bragg, N.C., he was assigned to the 1st Cavalry Division and sent to Japan, followed by Korea in July of 1950. On April 28, 1951, John was wounded in action and would spend the next six months recovering in an Army hospital in Japan. He returned home in November of 1951 and was honorably discharged on May 22, 1952. Following his discharge, John would spend an additional 23 years in the Army Reserves. John was employed at Pennsylvania Wire Rope, Sylvania and then retired from Phillips in 1993. He was an avid outdoorsman who enjoyed fishing and hunting, receiving the Triple Trophy award for the 1968 – 1969 hunting season. He was one of 39 individuals in Pennsylvania to receive this award. As a young man John enjoyed flying and held his private pilots license for many years. Surviving are a daughter, Susan A. (Robert) Pearson of Muncy; four sons, John L. (Roxanna) Krysik of Williamsport, Daniel S. Krysik of Montgomery, James J. Krysik of Hughesville, and Kraig (Jana) Steppe of Michigan; 10 grandchildren, Jason Little, Stacy Taylor, Kyle Krysik, Tiffany Hummel, Lee Barto, Brandy Metzger, Stephanie Krysik, Michael Steppe, Zachary Steppe and Cassidy Steppe; 18 great-grandchildren; two great-great-grandchildren; a sister-in-law, Jean Fry of Turbotville; and several nieces and nephews. In addition to his wife and parents, John was preceded in death by a granddaughter, Corina Krysik; and 11 brothers and sisters. Funeral services will be held 1 p.m. Thursday, March 12, at McCarty-Thomas Funeral Home, 557 E. Water Street, Hughesville, with Pastor Doug Mellott officiating. Burial will follow in Twin Hills Memorial Park, Muncy, with graveside military honors accorded by combined veteran’s organizations. Friends may call from noon to 1 p.m. Thursday at the funeral home. Expressions of sympathy may be sent to the family at www.mccartythomas.com.

John Krysik, 88, of Hughesville, died Friday, March 6, 2020 at The Gatehouse. Born June 22, 1931 in Creighton, PA, he was a son of the late Joseph and Mary Krysik. His wife of 61 years, the former Mary Lou Odon, preceded him in death on December... View Obituary & Service Information

The family of John Krysik created this Life Tributes page to make it easy to share your memories.

Send flowers to the Krysik family.