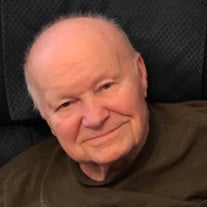 John Hoodak of Dushore died Monday, September 14, 2020 at home after a long courageous battle with Parkinson’s Disease. Born in Lopez, PA on June 2, 1936 the son of the late Stephen and Sophie Vanesko Hoodak. He served his country in the Air Force and became a staff Sargent serving in the Korean Conflict working in a hospital as a Lab technician in the Philippines. He played minor league baseball for the Boston Red Sox’s farm team with a 308-batting average. He turned down a major league contract as a catcher because of the low wages paid to players at the time. He returned to Sullivan County and married Margaret Taffe at Saints Peter & Paul Byzantine Catholic Church in Lopez. Throughout his life he worked numerous jobs from construction to working on a gas line from Reading to Philadelphia to working for Penelec. He later worked many years selling insurance door to door throughout Pennsylvania. He became a licensed Real Estate salesman and later a Real Estate Broker. He also worked for GTE Sylvania in Towanda, PA. He was elected a Sullivan County Commissioner serving from 1976 to 1980. As Commissioner he helped bring to the area the former Sullivan County Medical Center in Laporte and the Sullivan Terrace senior housing in Dushore. Along with his wife he purchased the former Green Swan Hotel in Dushore in 1976 operating the business until 1991. He was a member of Saints Peter and Paul Byzantine Catholic Chapel in Lopez, PA and a member of the Mildred American Legion and a former member of the White Ash Land Association. He enjoyed hunting, fishing, picking berries, watching sports, trips to Florida and visiting with family and friends and anyone he met. He is survived by his wife Margaret at home, children, James (Monica) Hoodak of Wyalusing, PA., Mary (Dewayne) Lawhon of Plant City, FL., and Jeff and John Hoodak of Dushore, PA; two sisters, Gloria Weisbrod of Lopez, Helen (Joseph) Silver of Carlisle, PA; a brother, Gordon (Sandy) Hoodak of Reading, PA.; three grandchildren, Cassandra, Nicholas and Alesha Lawhon; two brothers-in-law, Richard (Mary) Taffe of Dushore, PA and Michael Gregori of Dushore, PA; and a sister-in-law, Catherine Charniski of Mildred, PA. He is also survived by numerous nieces and nephews and many friends. He is predeceased by two brothers, Nicholas, Stephen; infant brothers Leonard and David; a sister, Marion; an infant sister, Margaret; four brothers-in-law, Thomas Taffe, Raymond Lewis, Eugene Weisbrod, and John Charniski; and four sisters-in-law, Rose Gregori, Susan Lewis, Mary Hoodak and Shirley Taffe. A Byzantine Catholic funeral Liturgy will be held 11 a.m. Thursday, Sept. 17, at St. Francis Church, Mildred, celebrated by his pastor, Rev. Leonard A. Martin S.J. Burial will be in Saints Peter and Paul Byzantine Catholic Cemetery, Lopez. Arrangements have been entrusted to McCarty-Thomas Funeral Home, Dushore. Expressions of sympathy may be sent to the family at www.mccartythomas.com. The family requests Liturgy cards in his memory.

John Hoodak of Dushore died Monday, September 14, 2020 at home after a long courageous battle with Parkinson&#8217;s Disease. Born in Lopez, PA on June 2, 1936 the son of the late Stephen and Sophie Vanesko Hoodak. He served his country... View Obituary & Service Information

The family of John Hoodak created this Life Tributes page to make it easy to share your memories.

Send flowers to the Hoodak family.