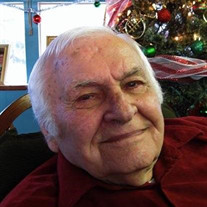 John Albert Gorencel, 97, of Shaffers Notch Road, New Albany, PA, passed away peacefully at Darway Nursing Home in Forksville, PA on September 25, 2019. John was born January 3, 1922 in Langelohe, Germany, son of Johann Gorenzel and Frieda Auguste Helen (Marben) Gorenzel. He came to the US with his parents and siblings in February, 1926 at the age of four. He resided in Newark, NJ where he attended public schools, graduating from Central Commercial and Technical High School in 1938 at the age of 16. He met and married Mary Louise Hamilton in Newark, N.J. in 1943 where they resided while he was serving in the Merchant Marines. He was honorably discharged in May, 1945 and upon his return, relocated to Irvington, N.J. where he raised his family. He was employed by Fisher Baking Company in Newark, N.J. for 25 years, the US Postal Service in Newark, New Jersey where he worked until 1970 and then relocated to New Albany, PA to live full time at the “farm” which until then was the family summer home. He gained employment at Procter & Gamble Paper Products in Mehoopany, PA until his retirement in June, 1988. John and his wife Mary enjoyed camping and fishing with his brother-in-law and sister-in-law, Fred and Margie Hamilton who visited PA often. They all did some traveling together in their campers while his wife was still alive. He enjoyed “putzing around” the farm property and renovated the entire home himself over the course of the 62 years he owned it. He enjoyed watching Sunday football games and visiting his children. John was also a member of St. John’s Lutheran Church of Wilmot, PA. In addition to his parents, John was preceded in death by his beloved wife Mary Louise of 46 years, who passed away in April, 1989; a daughter, Lee Henri Gorencel, age 21, in 1967; a brother, Werner Gorenzel; a sister, Elly Gorenzel Stumpf; a grandson, Bradley Bandonis, age 16; and infant granddaughter, Kaitlyn Gorencel. He is survived by his three children, John G. (Andrea) Gorencel of San Antonio, Texas, Dr. Christopher M. (Lynn) Gorencel of Lafayette, Louisiana, and Suzanne G. Ambs of Shaffers Notch Rd, New Albany, PA; five grandchildren, Jonathan Gorencel of Fairfield, California, Jenna Lynn Gorencel of San Antonio, Texas, Matthew (Katie) Ambs of Glenwood, Maryland, Jason (Bette) Ambs of Shaffers Notch Rd, New Albany, PA and Shannon Ambs (Leland) Repsher of Pittston, PA; six great- grandchildren; five step-grandchildren; and one step-great-great- grandchild. Funeral services will be held 2 p.m. Monday, September 30, at McCarty-Thomas Funeral Home, 119 Carpenter St., Dushore, with Rev. Phyllis A. Pelletier officiating. Burial will follow in Wyalusing Cemetery. Friends may call from 1 to 2 p.m. Monday at the funeral home. In lieu of flowers, the family has requested donations be made to The Alzheimer’s Association, at the Alzheimer’s Chapter, 57 North Franklin St., Wilkes Barre, PA 18701. Expressions of sympathy may be sent to the family at www.mccartythomas.com.

The family of John A. Gorencel created this Life Tributes page to make it easy to share your memories.

Send flowers to the Gorencel family.