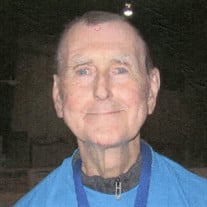 Jesse W. Farnsworth, 90, of Muncy, died Sunday, January 22, 2017 at Skilled Nursing & Rehabilitation, Muncy. Born March 5, 1926 in Franklin Twp., he was a son of the late Leroy and the late Ada (Fowler) Farnsworth. Jesse worked for Fraley's Auction Co., and as a farmhand for many different farmers. He is survived by a brother, John Farnsworth of Muncy; a niece, Cherie (Steven) Schwenk of Muncy; two great nieces, Laura M. and Lindsy M. Schwenk; and close friends, Larry and Barbara Snyder. In addition to his parents, he was preceded in death by three brothers, Harry, William, James Farnsworth; a niece, Cleo Dell; and close friends, Walter and Elva A. Snyder. Funeral services will be held 11:00 a.m. Thursday, January 26 at McCarty-Thomas Funeral Home, 557 E. Water Street, Hughesville, with Rev. Max L. Walters, Jr. officiating. Burial will be in Pine Summit Cemetery. Friends may call from 10 to 11 a.m. Thursday, at the funeral home. Expressions of sympathy may be sent to the family at www.mccartythomas.com.

The family of Jesse W. Farnsworth created this Life Tributes page to make it easy to share your memories.

Send flowers to the Farnsworth family.