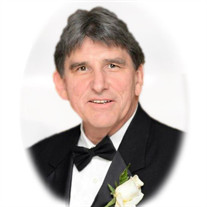 Jeffrey A. Meck, 63, of Hughesville passed away Monday, June 18, 2018 at his home. Born November 11, 1954 in Pottsville, he was a son of the late Charles J. and Bertha L. (Deibert) Meck. On September 21, 2002 he married the former, Tina West Richlin, who survives. Jeffrey graduated from Schuylkill Haven High School. He then went on to attend Penn State University, and eventually graduated Kutztown University with a Bachelor’s Degree in psychology. Jeffrey loved reading and collecting science fiction and mystery books. He was a music aficionado, and an avid fan of his son's bands. Jeffrey was also the Proud Pappy of his one year old granddaughter, Lily. In addition to his wife, he is survived by a son, Allan M. (Andrea Silverstrim) Meck of South Williamsport; a daughter, Amanda M. West of Williamsport; two sisters, Beth (Carl) Meckley of Schuylkill Haven, and Libby (Richard) Gaffney of Orwigsburg; two brothers, Timothy (Candy) Osborne and Walter (Jenny) Meck both of Orwigsburg; a son-in-law, Matthew Saratowski of Williamsport; a father-in-law, James H. Richlin, Sr. of New Albany; a granddaughter, Lily Silverstrim-Meck; and his beloved dog, Autumn. In addition to his parents, he was preceded in death by his mother-in-law, G. Mary Richlin. Funeral services will be held 12 p.m. Saturday, June 23 at the Church of the Resurrection, 75 Musser Lane, Muncy, PA with Rev. Glenn McCreary officiating. Burial will be in Union Cemetery, Schuylkill Haven on Monday, June 25, at 11:30 a.m. Friends may call from 11 to 12 p.m. Saturday at the church. In lieu of flowers, the family suggests memorial contributions be made to the Jeffrey Meck Memorial Fund, Lycoming County Career & Technology Center, 293 Cemetery Street, Hughesville, PA 17737. Expressions of sympathy may be sent to the family at www.mccartythomas.com.

The family of Jeffrey A. Meck created this Life Tributes page to make it easy to share your memories.

Jeffrey A. Meck, 63, of Hughesville passed away Monday, June...

Send flowers to the Meck family.