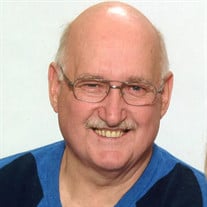 James P. “Butch” Russell Jr., 75, of Hughesville, passed away Thursday, July 30, 2020 at UPMC Susquehanna Williamsport. Born January 18, 1945 in Lewisburg, he was a son of the late James P. Sr. and Josephine E. (Myers) Russell. He and his wife, the former Donna M. Bachle, celebrated 55 years of marriage on April 17, 2020. Jim worked as a Journeyman with local 810 Plumbers and Steamfitters Union and retired in 2007 from local 520 Plumbers and Pipefitters Union, after having worked there for over 35 years. He was a member of the Muncy Valley Moose, Sons of the American Legion, Post 35, Hughesville, and The Beacon: A United Methodist Church. Jim loved hunting and spending time at the family cabin. He also loved spending time with his family, especially his grandchildren, and visiting with the neighbors and his friend Irvin Bomboy. Surviving, in addition to his wife, are two sons, James P. (Tammy) Russell III of Hughesville, and Joseph D. (Stacey) Russell of Muncy; a brother, John M. (Jane) Russell of Hughesville; a daughter-in-law, Lori J. Russell of Watsontown; eight grandchildren; and four great-grandchildren. In addition to his parents, Jim was preceded in death by a son, Jeffery H. Russell and a sister, Judy Russell Schneider. Funeral services will be held 11 a.m. Wednesday, August 5, at The Beacon: A United Methodist Church, 148 S. Main St., Hughesville, with Pastor Doug W. Mellott officiating. Friends may call from 10 to 11 a.m. Wednesday at the church. Arrangements have been entrusted to McCarty-Thomas Funeral Home, Hughesville. Expressions of sympathy may be sent to the family at www.mccartythomas.com.

The family of James P. "Butch" Russell Jr. created this Life Tributes page to make it easy to share your memories.

Send flowers to the Russell family.