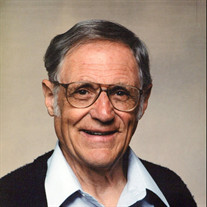 James R. Ritter Sr., 94, was taken to heaven to conduct the angel choir on Friday, March 29, 2019, after a brief, peaceful stay at The Gatehouse. He was surrounded by his children. A native of Eagles Mere, he was born on December 9, 1924 to the late Mary Jane “Jennie” (Rightmire) and H. D. Ritter. He attended elementary school in Eagles Mere and graduated from Sonestown High School. Jim worked at various jobs in Eagles Mere, including the downtown grocery store, and telephone operator as well as mail clerk in the Crestmont Hotel. After a brief stint in the U. S. Army, where he received a sharpshooter’s medal, he attended the former Dickinson College (Lycoming College) and later transferred to Mansfield University where he graduated as class president with a Bachelor’s Degree in Music Education. He received his Masters Degree in Music Education from Columbia University, New York City. He is a life member of Phi Mu Alpha Music Fraternity. In 1948, Jim was hired as the music teacher for the East Lycoming School District where he taught music and conducted the chorus for grades one through 12. When he arrived, he found there was a girl’s chorus and a few students interested in a band which consisted of a cello, four violins, a saxophone, a trumpet and numerous drummers. After receiving $1,000 from the Rotary Club for instruments, he stirred more interest. Jim developed a dance band and concert band. Later he began Hughesville’s first marching band and performed at football games and various parades throughout the county. He increased the size of the chorus to include both boys and girls and sent many students to district, regional and state chorus, plus county and district band. The band was also selected to perform in Harrisburg at the inauguration of Governor Leader. Jim later worked in the Williamsport Area School District still encouraging students to participate in music whenever possible. A few of the schools in the district where he taught were Curtain, Washington, Jefferson and Hepburnville. Jim retired from teaching in 1980 but kept his love of music throughout his life. A gifted pianist, Jim was always asked to play for various activities in the community such as hymn sings, weddings and other performances. During a Business and Professional Women’s talent show, he met Megan Griffith and asked her out for a milkshake. The two were married on June 20, 1953 in Trinity Lutheran Church, Hughesville. After the ceremony, the couple rode down Main Street in a horse-drawn carriage with the band playing behind them. They celebrated 42 years of marriage before her death in 1996. Jim was a member of the Hughesville Rotary for many years. He played the piano at weekly meetings and accompanied the Rotarians in the annual Rotary Show, where he had to improvise much of the time. Jim was a 70 plus-year member of the Evergreen Lodge 163, F. & A. M. Monroeton, where his father had also been a member. Jim belonged to the Scottish Rite Valley of Williamsport Consistory, and played a variety of instruments in the orchestra and the Teteque Band. In addition, he was a long-time conductor of the Consistory Choir. He was awarded his 33rd degree in 1987. A life-long member of the Eagles Mere Rod and Gun Club, Jim enjoyed walking in the woods and enjoying the comradery of family and friends during hunting season. Each year he and a few friends would go to the cabin during fishing season but would never leave the front porch. In 1972, Jim accepted the position of organist and choir director at Trinity Lutheran Church in Hughesville. While there he conducted the Sunday School choir, created the “God Squad” choir, and began a men’s choir called, “The Sons Of Thunder”, which performed at various services and activities throughout the community. He was also a Sunday School teacher for many years. He retired after 42 years of faithful service. Jim is survived by his son, Rev. James R. Ritter Jr. (Mary) of Watsontown; his daughter, Mary Megan (Stuart) Wolfe, of Hughesville; and grandchildren, Jennifer Heyman, Watsontown, Jessica (Brent) Ritter-Harger, Gettysburg, Jamie (Steven) Windle, Honeybrook, and Coleman Wolfe, East Jordan, MI; great-granddaughters, Elise Garverick and Avery Ritter-Harger; plus numerous nieces, nephews and cousins. Jim enjoyed reading, traveling and spending time with his grandchildren and other family members. Whether performing in front of an audience, or just for his family, his love of music inspired and entertained others. His music and presence will be greatly missed. Contributions in Jim’s name may be made to Trinity Lutheran Church, 120 S. Main St., Hughesville or The Scottish Rite Valley of Williamsport, A.A.S.R., 348 Market St., Williamsport. Funeral services will be held Friday, 11 a.m. Friday, April 5, at Trinity Evangelical Lutheran Church, 122 South Main Street, Hughesville, with Rev. Cinda J. Brucker officiating. Burial will follow in Pleasant Hill Cemetery, Hughesville. Friends may call from 6 to 9 p.m. Thursday, April 4, at McCarty-Thomas Funeral Home, 557 E. Water Street, Hughesville, and 10 to 11 a.m. Friday at the church. A Masonic funeral service will be held Thursday, April 4, at 5:45 p.m. at the funeral home. Expression of sympathy may be sent to the family at www.mccartythomas.com.

James R. Ritter Sr., 94, was taken to heaven to conduct the angel choir on Friday, March 29, 2019, after a brief, peaceful stay at The Gatehouse. He was surrounded by his children. A native of Eagles Mere, he was born on December 9, 1924... View Obituary & Service Information

The family of James R. Ritter, Sr. created this Life Tributes page to make it easy to share your memories.

Send flowers to the Ritter family.