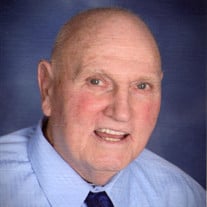 James E. Reynolds, 79, of Dushore, died Monday, January 23, 2017, at the Highlands Care Center, Laporte. Born October 8, 1937 in Philadelphia, he was a son of the late James J. Franks and Irene (Friedrich) Franks. He and his wife, the former Judith A. Thompson, would have celebrated 56 years of marriage on June 24, 2017. Jim retired in 1996 from Rohm & Haas Company after having worked there for 30 years. He was an outdoor enthusiast who enjoyed hunting, fishing, feeding the wild animals, and watching the blue birds. Jim also loved traveling, camping, and writing poetry. He served his country honorably in the U.S. Army during the Korean War, and enjoyed volunteering and fundraising for various veterans organizations. He was a member of the Forty and Eight Voiture 549, Wyalusing, VFW Post 268, Towanda, and a Life Member of the American Legion Loyalsock Post 996. Jim was a dedicated Master Mason who held memberships in Evergreen Lodge No. 163, Monroeton, Rural Amity Lodge No. 70, Athens, Union Royal Arch Chapter No. 161, Towanda, Northern Council No. 24, Athens, AASR Valley of Towanda, and Order of the Eastern Star Chapter 76, Towanda. He was a former member of Irem Temple Shrine, Dallas, and Valley of Williamsport Scottish Rite Consistory. Surviving, in addition to his wife, is a son, James J. Reynolds of Hatboro, PA; a daughter, Jacqueline D. (Douglas) Beck of Horsham, PA; and four grandchildren, Rhiannon A. Reynolds, Nicole Ann Beck, Brian D. Beck, and Kyle J. Beck. Funeral services will be held 11 a.m. Saturday, January 28, at Zion Lutheran Church, 116 Carpenter St., Dushore, with Rev. Phyllis A. Pelletier officiating. Friends may call from 9 to 11 a.m. Saturday at the church. Members of the American Legion Loyalsock Post 996 will pass in review at 10:30 a.m., followed by a Masonic funeral service at 10:45 a.m. by the Evergreen Lodge No. 163 F. & A. M. Burial will be held in Washington Crossing National Cemetery, Newtown on Tuesday, January 31, at 11 a.m. The family will provide the flowers and suggest memorial contributions to Zion Lutheran Church, 116 Carpenter St., Dushore, PA 18614 or to Disabled American Veterans at www.DAV.org. Arrangements have been entrusted to the McCarty-Thomas Funeral Home, 119 Carpenter St., Dushore. Expressions of sympathy may be sent to the family at www.mccartythomas.com.

James E. Reynolds, 79, of Dushore, died Monday, January 23, 2017, at the Highlands Care Center, Laporte. Born October 8, 1937 in Philadelphia, he was a son of the late James J. Franks and Irene (Friedrich) Franks. He and his wife, the former... View Obituary & Service Information

The family of James E. Reynolds created this Life Tributes page to make it easy to share your memories.

Send flowers to the Reynolds family.