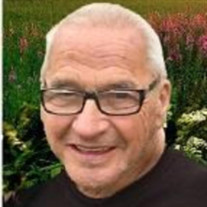 James H. “Jim” Patterson Sr., 82, of Hughesville, died Sunday, December 20, 2020 at UPMC Susquehanna, Williamsport. Born February 17, 1938 in Williamsport, he was a son of the late Archie S. and Fannie F. (Bosch) Patterson. He and his wife, the former Sara Jane Kepner, would have celebrated 62 years of marriage on March 21, 2021. Jim served his country honorably in the U.S. Army Reserves and was a member of the American Legion Post 35, Hughesville, and the Muncy VFW. He retired from Fisher Mining in 2010 after having worked there for over 50 years as a dragline operator. Jim was a dedicated family man who enjoyed farming, riding his Goldwing motorcycle, and above all, spending time picking on his grandchildren. Surviving, in addition to his wife, are two daughters, Diann (Max) Walters of Hughesville and Tammy (Kevin) Harbin of Smithfield, VA; two sons, James Patterson Jr. of Neosho, MO and Harry Patterson of Hughesville; a brother, Donald (Dorothy) Patterson of Portersville; 12 grandchildren; and 22 great-grandchildren. Funeral services will be held 10 a.m. Thursday, December 24, at Hughesville Friends Church, 137 South Third Street, Hughesville, with George L. Walters, his grandson, officiating. Burial will follow in Twin Hills Memorial Park, Muncy, with graveside military honors accorded by combined veteran’s organizations. Friends may call from 9 to 10 a.m. Thursday at the church. For those attending the services please follow CDC guidelines by wearing a mask and maintain social distancing. Arrangements have been entrusted to McCarty-Thomas Funeral Home, Hughesville. Expressions of sympathy may be sent to the family at www.mccartythomas.com.

The family of James H. "Jim" Patterson, Sr. created this Life Tributes page to make it easy to share your memories.

Send flowers to the Patterson family.