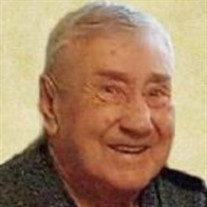 James J. “Jake” Gardner, 92, of Mildred, died Monday, August 24, 2020, at the Personal Care Home at Guthrie Towanda Memorial Hospital. Born May 26, 1928 in Lopez, he was a son of the late John and Alice (Hatton) Gardner. His wife of 67 years, the former Josephine Marie Angelo, preceded him in death on February 29, 2016. Jake retired from GTE Sylvania, Towanda, after having worked in the maintenance department for 25 years. He was a member of the former Trinity Lutheran Church, Mildred, and served on church council for many years. Jake was also a member of Evergreen Lodge No. 163 F. & A. M. and Taylor Creek Hunting Club where he served as past president. Jake was an avid baseball and softball player who also loved hunting, trapping, and spending time at his second home, Taylor Creek Hunting Club. Surviving are three daughters, Rosemary Minarsky of Monroeton, Cynthia (Mike) Matje of Philadelphia, and Patricia (Harold) Brainard of VA; two sons, John (Kathy) Gardner of Mildred and Richard Gardner of WV; a sister, Esther (Bill) Bohensky of Dushore; seven grandchildren; and 10 great-grandchildren. In addition to his parents, Jake was preceded in death by a sister, Mary Potuck. Funeral services will be held at the convenience of the family. The family will provide the flowers and suggest memorial contributions to the Mildred Fire Company, P.O. Box 147, Mildred, PA 18632 or Trinity Cemetery Association, P.O. Box 211, Mildred, PA 18632. Arrangements have been entrusted to the McCarty-Thomas Funeral Home, Dushore. Expressions of sympathy may be sent to the family at www.mccartythomas.com.

The family of James J. "Jake" Gardner created this Life Tributes page to make it easy to share your memories.

Send flowers to the Gardner family.