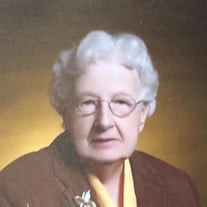 Irene Ellen (Bown) Harvey passed away on May 16, 2021 in Forksville, at age 95. She was born on January 13, 1926, to the late Robert Mckinley and Beulah Irene (McCarty) Bown. As a teen Irene became a member of the Lincoln Falls Wesleyan Church. There she not only taught Sunday school, but was also the church pianist for many years. Irene graduated in1944 from the Estella High School. She worked at the Jennings General Store and was a telephone operator there for many years. It was around that time that she was also a plane watcher for the County, though she never saw one. She went on to become the cook for the Estella High School for 14 years. In her 30's she bought Elkmont. With the help of her father, they restored it to become her thriving guest house, which she opened as Elkmont Guest House in 1956. On November 22, 1962 she married a widowed guest named Cyril Hingston Harvey. Cyril had three grown children, Dorothy, Ruth, and Cyril II. Irene and Cyril ran the Guest House for many successful years together. They truly enjoyed the wide variety of guests that came to stay. Hunters, hikers, bird watchers, bow festival goers, and large families needing a place to gather for reunions. She held her own family reunions for both sides of her family, separately, every other year. Irene also held a Christmas party every year for her immediate family. Irene and Cyril enjoyed traveling during the winter months. They drove to California and Mexico visiting more friends and family. Together with being the proprietor of Elkmont, Irene also ran her Jelly Cupboard which was built by her father and brother Dallas in 1986. There she would sell her breads, pies and other homemade goodies and crafts. But it was her wide variety of jelly's, jam's and preserves that kept many coming back for more. These tasty treasures were sought after by the case to be distributed as gifts and wedding favors. She also had a booth in Eagles Mere, for two summers, to sell her wares on Saturdays. The booths were in a hotel garage one summer and a barn the next. Her father again built for her. Her booth had a floor and picket walls for displays. A shopper, Rodney Goshaw, told her that her booth was the nicest one. Over the years Irene hired local people to help with such a large business. She was very grateful for all the help she received. Especially anyone who would dust. Elkmont and “Auntie” were featured in the January 2015 edition of PENNlines. But most of all, Irene enjoyed her people. The guests she considered family. Generations of families that continued to enjoy her hospitality over the years and kept in touch long after they could no longer come for a visit. In addition to her parents, she was predeceased by her husband Cyril; and brothers, Donald Elwood and Dallas Dewane. Irene is survived by her brother Leland Darrell (Jeanette) Bown; two sisters-in-law, Alice and Sandy Bown; nieces and nephews, Sandra, Deborah, Daniel, Dennis, Diane, Dixie, Brent, and Steven; three step-children, Dorothy, Ruth, and Cyril II; and many great nieces and nephews. A special thanks to Grace Bown for the many grocery deliveries when Irene could no longer drive. Also, thank you to the Lincoln Falls Church family for lending a hand with rides to church and other needs. Funeral services will be held 11 a.m. Monday, May 24, at Lincoln Falls Wesleyan Church, 7083 Rt. 154, Forksville, with Rev. William J. Hargenrader officiating. Burial will follow in Elkland Friends Cemetery, Shunk. Friends may call from 10 to 11 a.m. Monday at the church. Arrangements have been entrusted to McCarty-Thomas Funeral Home, Dushore. Expressions of sympathy may be sent to the family at www.mccartythomas.com.

Irene Ellen (Bown) Harvey passed away on May 16, 2021 in Forksville, at age 95. She was born on January 13, 1926, to the late Robert Mckinley and Beulah Irene (McCarty) Bown. As a teen Irene became a member of the Lincoln Falls Wesleyan Church.... View Obituary & Service Information

The family of Irene B. Harvey created this Life Tributes page to make it easy to share your memories.

Send flowers to the Harvey family.