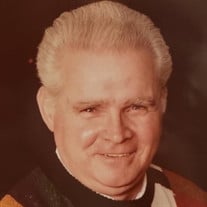 Howard V. Davis, 78, of Montoursville, died Monday, Sept. 20, 2021, at The Gatehouse. Born Jan. 1, 1943, in Williamsport, he was a son of the late Ellis E. and Edith V. (Miller) Davis. He and his wife, the former Janet A. Folmar, would have celebrated 26 years of marriage on Sept. 24, 1994. Howard was a graduate of Williamsport High School, Class of 1962. Shortly after graduation he began his working career with Young Industries, Muncy. He would go on to become the machine shop supervisor and retired in 2008 after having worked there for 45 years. Howard was an avid football fan who loved Penn State and the Green Bay Packers. He also loved NASCAR and was a huge Dale Earnhardt fan. In his free time Howard enjoyed reloading gun shells, hunting and farming at Kendall Peterman’s farm. Surviving, in addition to his wife, are a daughter, Teresa K. (Craig) Loreman of Hughesville; two sons, Samuel E. (Niki) Davis of Colorado Springs, Color., and Wayne R. (Jeanne) Folmar of Tannersville; a sister, Debra (David) Hensler of Cogan Station; three grandchildren, Taylor Hight, Keshia (Mike) McDonald, and Megan (Brad) McCollin; and four great-grandchildren, Davis Pace, Maverick McDonald, Bennett McCollin and McKylee Vollman. In addition to his parents, Howard was preceded in death by a sister, Nina Houseknecht; and two brothers, Charles Davis, and Thomas Davis. Funeral services will be held 11 a.m. Monday, Sept. 27, at McCarty-Thomas Funeral Home, 557 E. Water Street, Hughesville, with Pastor Jerry Uppling officiating. Burial will follow in Twin Hills Memorial Park, Muncy. Friends may call from 10 to 11 a.m. Monday at the funeral home. The family will provide the flowers and suggest memorial contributions to The Gatehouse at www.susquehannahealthfoundation.org/ways-to-give/make-a-donation. They would also like to express their deepest gratitude to staff of The Gatehouse for the wonderful care Howard received there. Expressions of sympathy may be sent to the family at www.mccartythomas.com.

The family of Howard Victor Davis created this Life Tributes page to make it easy to share your memories.

Send flowers to the Davis family.