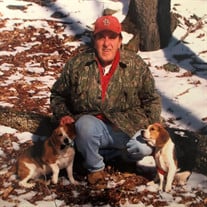 Horace Norton Parker III, 80, of Dushore, was taken on Wednesday, December 8, 2021, with his loving wife by his side. They would have celebrated nine years of marriage on December 9, 2021. Born March 28, 1941, in Trenton, N.J., he was the son of the late Horace N. II and Florence Olive (Nightingal) Parker. Norton was raised in Mercerville, N.J., where he was a standout athlete in soccer, basketball, and baseball. In 2007 he was inducted into the Steinert High School Hall of Fame. Norton formerly resided in Hopewell, N.J., coaching many sports teams for his children, as well-as coaching and having good times playing with his friends for Contes, Mike’s Tavern, and Hill Billy Hall. He enjoyed spending time at Colonial Sportsman’s Club and White Ash Land Association with family and friends, swimming and picnicking in the summers and hunting in the winters. He loved working in the yard and in his vegetable garden. Norton made a mean spaghetti sauce and loved to bar-b-que. He spent his career as a government employee before retiring to Sullivan County, Pa. He was a member of White Ash Land Association since 1993. He was a true outdoorsman who enjoyed his time fishing and hunting. He also enjoyed spending time with his grandchildren teaching them everything he knew. He had many pets over the years, but none compared to his cats, Cinders and Gizmo, or his dogs, Reba and Molly. Surviving is his wife, the former Tammy Richlin; three daughters, Karen (Maleci) Malec, Tracey (Daniel) McKeown, and Cindy (Jeff) Wilson; three sons, Michael Parker, Francis (Becky) Richlin, and George Lichtenberger IV; 11 grandchildren, Kyle, Jessica, Emily, Timothy, Cheyenne, Nathan, Kaleb, Aiden, Samantha, George V, and Brigitte; three sisters, Linda Johnson, Karen Worob, and Nancy Collins; four brothers, Gary (Maxine) Parker, Michael Parker, John Parker and David Parker; and numerous cousins. In keeping with Norton’s wishes there will be no services. In lieu of flowers memorial contributions may be made to White Ash Land Association, Attn. Board of Directors, P.O. Box 296, Mildred, PA 18632, or McCarty-Thomas Funeral Home, 119 Carpenter St., Dushore, PA 18614, or www.mccartythomas.com/payments-and-donations/donate-online to help defray the cost of funeral expenses. Arrangements have been entrusted to McCarty-Thomas Funeral Home, Dushore.

The family of Horace N. Parker III created this Life Tributes page to make it easy to share your memories.

Horace Norton Parker III, 80, of Dushore, was taken on Wednesday,...

Send flowers to the Parker family.