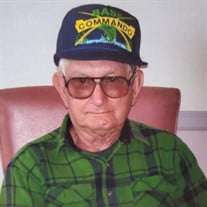 Herman U. “Pappy” Woodside, 91, formerly of Lairdsville, passed away peacefully on August 4, 2020 at Muncy Place. Herman was born on October 28, 1928 in Unityville, and was a son of the late Lawrence and Margaret Woodside. Herman is survived by his wife of 32 years, Cheryl (Robbins) Woodside; four daughters, Diane, Jane, Bonnie and Carol-Ann; a son, Donald; two step-sons, Brian and Sonny; two brothers-in –law; three sisters-in-law; 12 grandchildren; nine great-grandchildren; many nieces and nephews; and a special roommate, Morris Huff of Muncy Place. In addition to his parents, Herman was predeceased by two brothers; two sisters; two daughters- in- law; a brother in-law; a son-in law; two grandchildren; and one great-grandchild. Herman enjoyed gardening, making wine, hunting, woodworking and most of all being a grandfather. Herman’s last few years were spent with a very special great-granddaughter whom he called Jumping Jack (Jaeden). Herman also enjoyed and looked forward to lunch and dinner dates with his family. Herman always had a mason jar of wine and a smile, as he traveled around different parts of the county sharing along the way. Herman retired in 2005 from the sawmill in Hughesville. He served in the U.S. Army, and was a member of the American Legion Post 35, Hughesville. The family would like to express our sincere gratitude to the Staff and friends at Muncy Place. They would also like to thank Susquehanna Home Health Hospice Services. There will be a private graveside service for Herman at the convenience of the family. Herman will be laid to rest at the Lairdsville cemetery. Memorial contributions may be made to the American Legion Post 35, Hughesville. Arrangements have been entrusted to McCarty-Thomas Funeral Home, Hughesville. Expressions of sympathy may be sent to the family at www.mccartythomas.com.

Herman U. &#8220;Pappy&#8221; Woodside, 91, formerly of Lairdsville, passed away peacefully on August 4, 2020 at Muncy Place. Herman was born on October 28, 1928 in Unityville, and was a son of the late Lawrence and Margaret Woodside. Herman... View Obituary & Service Information

The family of Herman U. Woodside created this Life Tributes page to make it easy to share your memories.

Send flowers to the Woodside family.