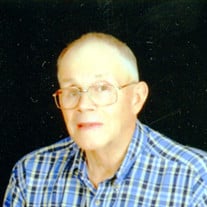 Herbert L. “Roy” King Jr., 77, of Forksville, died Monday, October 15, 2018 at his home. Born July 17, 1941 in Williamsport, he was a son of the late Herbert L. Sr. and Edith M. (Davis) King. He and his wife, Karen (Higley), celebrated 59 years of marriage on September 4, 2018. Roy spent his early years working and logging in the beautiful hills of Sullivan County with his horses. He was well known in Sullivan County for his horse pulling at the county fair. In 1976, Roy graduated from a meat cutting trade school in Toledo, Ohio. He and Karen owned and operated R&K Meat Packing for the next 30 years. He was also active in his community. He served as an Elkland Township Supervisor for 11 years and was a member and past president of the Sullivan County Fair Association. Roy was a member of Lincoln Falls Wesleyan Church, where he served as a trustee and Sunday school teacher. He was a dedicated husband, father, grandfather and great -grandfather who loved spending time with his family. Roy also enjoyed hunting, fishing, and farming. Surviving, in addition to his wife, are five daughters, Loralea (J. Edward) Hartle of Danville, Tammy (Jeffrey) Quail of Virginia Beach, VA, Sheila (Todd) Speaker of Cogan Station, Sarah (Thomas) Ordille of Hummelstown, and Kimberly (Thomas) Nagy of Spring City; two sisters, Carolyn (Steve) Daniel of Forksville, and Linda (Robert) Mosier of Dushore; three brothers, William (Doris) King, David (Edna) King, and Brett (Diane) King all of Hillsgrove; 10 grandchildren; and five great-grandchildren. In addition to his parents, Roy was preceded in death by a brother, Tommy King. Funeral services will be held 11 a.m. on Saturday, October 20, at Lincoln Falls Wesleyan Church, 6875 Rt. 154, Forksville, with Rev. William J. Hargenrader officiating. Burial will be held privately at the convenience of the family. Friends may call from 6 to 8 p.m. Friday, October 19, at the McCarty-Thomas Funeral Home, 119 Carpenter Street, Dushore. Expressions of sympathy may be sent to the family at www.mccartythomas.com.

The family of Herbert L. "Roy" King Jr. created this Life Tributes page to make it easy to share your memories.

Send flowers to the King family.