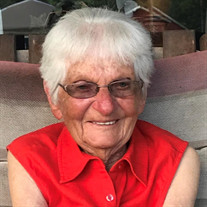 Helen M. Stackhouse, 96, of Glen Mawr, died Thursday, December 24, 2020 at UPMC Susquehanna, Williamsport. Born July 13, 1924 in Penn Township, Lycoming County, she was a daughter of the late Grover A. and Viola N. (Newman) Harriman. Her husband of 70 years, Kenneth M. Stackhouse, preceded her in death on August 14, 2014. Helen was a graduate of the former Picture Rocks High School, Class of 1942. She was employed with the former Mellons Furniture for a brief time and then with the United States Postal Service, Hughesville, as a custodian for several years. Helen was a member of Point Bethel United Methodist Church and enjoyed making quilts for her children and many of her grandchildren. She was an avid gardener who also enjoyed canning, playing Quoits, Blongo, and her guitar in her younger days. One of Helen’s greatest joys was sitting on her porch swing enjoying the outdoors. Surviving are two daughters, Susan J. (Terry "Tom") Sheets of Hughesville, and Rebecca A. (Ronald) Broschart of Hale, MI; four sons, Kenneth M. (Janet) Stackhouse II of Muncy, Hugh James "Jake" (Janet) Stackhouse of Hughesville, Michael D. (Teresa) Stackhouse of Hughesville, and Jeffrey M. (Amy) Stackhouse of Hughesville; a son-in-law, Gary Craft of Hughesville; 15 grandchildren; and 23 great-grandchildren. In addition to her parents and husband, Helen was preceded in death by a daughter, Nancy L. Craft; a son, Richard K. Stackhouse; a grandson, Kirk A. Stackhouse; a sister, Delma A. Schrader; and a brother, Kenneth L. Harriman. Funeral services will be held privately in Twin Hills Memorial Park, Muncy, at the convenience of the family. The family will provide the flowers and suggest memorial contributions to Point Bethel United Methodist Church, 165 Point Bethel Rd., Hughesville, PA 17737. Arrangements have been entrusted McCarty-Thomas Funeral Home, Hughesville. Expressions of sympathy may be sent to the family at www.mccartythomas.com.

The family of Helen M. Stackhouse created this Life Tributes page to make it easy to share your memories.

Send flowers to the Stackhouse family.