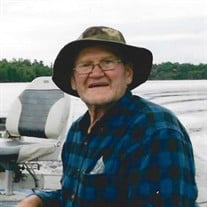 Harvey E. “Pap” Vough, 82, went to be with the Lord Monday, March 15, 2021 at Geisinger Medical Center, Danville. He was born February 11, 1939 at home in Dushore, a son of the late David and Edith Vough. Harvey attended elementary school at the Warburton Hill school and graduated from the Loyalsock High School, now Darway. He enlisted in the U.S. Air Force, but soon after, was medically discharged. He returned home to the family farm and married his wife of 45 years, Mary L. Vough, on September 10, 1960. Harvey was very active and well known in the community. He served 52 years as Director of the Sullivan County Conservation District. He was active with projects in mine reclaimation, seedling sale, envirothon for environmental education for high school students, Dirt and gravel programs and farmland preservation. He was also an active supporter of the local 4-H programs, especially the livestock club. Not only did he sell lambs to members, but he also helped them prepare, taught them to shear, and sometimes bought those lambs back for the kids. He spent his life on the farm, raising livestock, but also crops; “famous” for his potatoes and maple syrup. As well as being a lifetime farmer and active member of numerous clubs, he was a township supervisor during the 70’s when Agnes hit and was an active member of St. Paul’s Church of Overton. Harvey spent many years following his father’s footsteps in taking his potatoes to the Weis potato chip factory in Berwick. He generously donated potatoes and corn to the Central Pennsylvania Food Bank and was awarded with the Hunger Action Hero award in 2019. He was a square dancing and polka enthusiast, bike rider, hunter, and fisherman, especially on the first day of trout season with his family. His favorite past time was going out for ice cream with his grandchildren and great-grandchildren. He is survived by his brother, Victor (Donna) Vough of Athens; a stepbrother, Robert Reed of Sayre; four children, Carl (Joyce) Vough of Dushore, Ann (JR) Zeigler of Shunk, Christopher (Brandy) Vough of Hawaii, and Holly (Jeff) Mensch of Dushore; an adopted son, Clair (Linda) Pardoe of Dushore; a special friend, Carolyn Leljedal of Forksville; 10 grandchildren; 11 great-grandchildren; and numerous nieces, nephews, and countless “adopted” grandchildren. In addition to his parents and wife, Harvey was predeceased by two sisters and brothers-in-law, Evelyn (Don) Higley and Jeanette (Donald) Rohe; and his stepmother Francis Werline Vough. Funeral services will be held 11 a.m. Saturday, March 20, at St. Paul’s Church of Overton, 781 Overton Rd., New Albany, with Pastor Ron Dyer officiating. Burial will follow in East Forks Union Cemetery. Friends may call from 6 to 8 p.m. Friday, March 19, at McCarty-Thomas Funeral Home, 119 Carpenter St., Dushore. In lieu of flowers memorial contributions may be made to Sullivan County Conservation District – Envirothon or Central Pennsylvania Food Bank. Expressions of sympathy may be sent to the family at www.mccartythomas.com.

The family of Harvey E. "Pap" Vough created this Life Tributes page to make it easy to share your memories.

Send flowers to the Vough family.