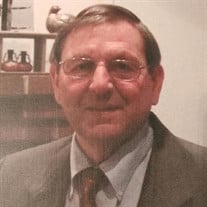 Harold E. Lowe, 77, of Muncy, died unexpectedly on Thursday, September 2, 2021. Born October 19, 1943, in Jerseytown, he was a son of the late Raymond W. and Laura Aldine (Ryder) Lowe. His wife of 52 years, the former Gail M. Miller, preceded him in death on November 22, 2018. Harold was a graduate of Muncy High School, Class of 1963. He was employed at the former Churchoes Market, Williamsport, prior to opening Lowes Super Duper, Clarkstown, in 1971. He and his wife Gail retired in 2013 after dedicating 42 years of their lives serving the residents of eastern Lycoming County. Harold was a lifetime member of the Muncy Creek Volunteer Fire Company, a member of the Muncy Lions Club, and former board member of Muncy Valley Hospital and Muncy Bank & Trust Company for many years. In his free time, he enjoyed hunting, puzzles, playing cards, and spending time with his family. Surviving, are two sons, Michael E. Lowe, and Mathew E. (Dusti) Lowe, both of Muncy; a brother, Gary R. Lowe of Mechanicsburg; and three grandchildren, Amanda Lowe, Hannah Lowe, and Jackson Lowe. In addition to his wife, and parents, Harold was preceded in death by a brother, Jesse Lowe. Friends may call from 6 to 8 p.m. Thursday, September 9, at McCarty-Thomas Funeral Home, 557 E. Water Street, Hughesville. A Celebration of Life will take place on Sunday, September 12, from 2 to 4 p.m. at the Hughesville Fireman's Social Hall. Arrangements have been entrusted to McCarty-Thomas Funeral Home, Hughesville. Expressions of sympathy may be sent to the family at www.mccartythomas.com.

The family of Harold E. Lowe created this Life Tributes page to make it easy to share your memories.

Send flowers to the Lowe family.