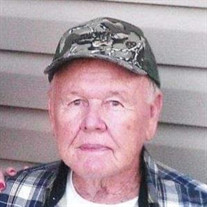 Harold M. ‘Red” Bennett Sr., 89, of Montgomery, died Monday, January 20, 2020 at Watsontown Health and Rehab Center. Born June 1, 1930 in Montgomery, he was a son of the late Charles S. and Ella A. (Hill) Bennett. His wife of 56 years, the former Rhena I. Grimm, preceded him in death on June 8, 2008. Red attended the Montgomery area schools and retired from the former Anton Waldman’s, Hughesville. He was an outdoor enthusiast who enjoyed hunting, fishing, and above all, spending time with his family. Surviving are two daughters, Donna J. Bennett, and Linda K. (Terry) Strouse, both of Montgomery; a brother, Marlon L. "Inker" (Ruth) Bennett of Montgomery; five grandchildren; 14 great-grandchildren; and five great-great-grandchildren. In addition to his wife and parents, Red was preceded in death by a son, Harold M. "Chuck" Bennett Jr.; one sister; and four brothers. Funeral services will be held 2 p.m. Thursday, January 23, at McCarty-Thomas Funeral Home, 557 E. Water Street, Hughesville, with Pastor Doug W. Mellott officiating. Burial will follow in St. John Lutheran "Brick Church" Cemetery, Montgomery. Friends may call from 1 to 2 p.m. Thursday at the funeral home. Expressions of sympathy may be sent to the family at www.mccartythomas.com.

The family of Harold M. "Red" Bennett created this Life Tributes page to make it easy to share your memories.

Send flowers to the Bennett family.