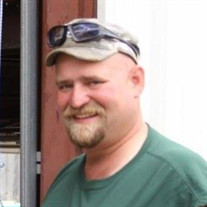 Gregory T. “Beef” Verrico, 50, of Muncy, died Friday, January 8, 2021 at UPMC Susquehanna, Williamsport. Born March 6, 1970 in Pittsburgh, he was a son of Linda M. (Murray) Bonney and the late Fredrick R. Verrico. He and his wife, the former Niena S. Betz, celebrated 14 years of marriage on September 9, 2020. Beef was employed at Fry’s Plastic, Muncy, for over 26 years. He was a dedicated farmer who enjoyed tractor pulls, and spending time with his family, especially his grandchildren. Beef was also an avid Pittsburgh Steeler’s fan. Surviving, in addition to his mother and wife, are a daughter, Alena M. (Justin) Greiner of Muncy; a step-son, Kevin C. (Dawn Fox) Heeman of Hughesville; two brothers, Mark A. Verrico of Montoursville, and Nick J. (Melissa) Verrico of Muncy; four adopted sons, Bill, Tate, Foust, and Ship; an adopted daughter, Erin; seven grandchildren, Claire, Jason, Jake, Kylee, Aubrey, Adrianna, and Nolan; his step-father, Dale Bonney; his best friend and mentor, John Fry; and his many farm boys. In addition to his father, Beef was preceded in death by a grandson, Carter Heeman. Funeral services will be held at the convenience of the family. Arrangements have been entrusted to McCarty-Thomas Funeral Home, Hughesville. Expressions of sympathy may be sent to the family at www.mccartythomas.com.

The family of Gregory T. "Beef" Verrico created this Life Tributes page to make it easy to share your memories.

Send flowers to the Verrico family.