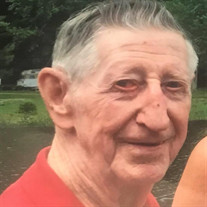 Gordon L. “String Bean” Myers, 90, of Hughesville, died Friday, October 2, 2020 at Muncy Place. Born February 1, 1930 in Muncy, he was a son of the late Tracy L. and Edna M. (Derrick) Myers. His wife of 68 years, the former Velva U. Koch, preceded him in death on February 15, 2020. Gordon retired in 1992 from GTE Sylvania, Williamsport, after having worked there for over 25 years. He also owned and operated Myers’ CB Center and Video Store for many years. Gordon believed in giving back to his community through his volunteering efforts with the Civil Air Patrol and the Hughesville Fire Department where he served as Fire Police for over 25 years. In his free time Gordon enjoyed woodworking, hunting, fishing, playing cards, and spending time with his family, especially his grandchildren. Surviving are a daughter, Susan M. (Terry) Walburn of Muncy; two sons, Marvin S. (Holly) Myers of Muncy, and Lewis J. (Bonnie) Myers of Hughesville; a sister, Althea Blain of Millersburg; 10 grandchildren; 21 great-grandchildren; and six great-great-grandchildren. In addition to his wife and parents, Gordon was preceded in death by a brother, Lewis Myers; two granddaughters, Ashley Myers and Yvonne Kennedy; and a great-granddaughter, Faith Myers. A graveside service will be held 1 p.m. Saturday, October 10, at Green Lawn Memorial Park, 62 Rt. 54 Hwy., Montgomery, with Pastor Dan Cale officiating. Friends may call from 10 a.m. to noon on Saturday, October 10, at the McCarty-Thomas Funeral Home, 557 E. Water St., Hughesville. Expressions of sympathy may be sent to the family at www.mccartythomas.com.

The family of Gordon L. "String Bean" Myers created this Life Tributes page to make it easy to share your memories.