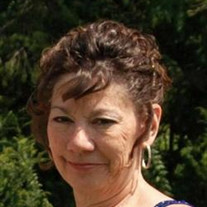 Gloria Jean “Mammy” Snavely, of Forksville, PA, passed away on February 4, 2016, at Robert Packer Hospital with her loving family at her bedside. She was 62 years old. Born February 21, 1953 in Muncy, she was the granddaughter of Alvin and Clara Faye of Montoursville. She and her husband, Robert Snavely, would have celebrated 43 years of marriage on July 28, 2016. Surviving, in addition to her husband, are her three daughters: Rebecca (Shawn) Cox of Wyalusing, Laura (Fiance Rob Heath) Snavely of Watsontown, and Amanda (Jeremiah) Lund of Forksville, and five grandchildren. Also surviving is her sister, Peggy Hall, of Williamsport, and two brothers, Joseph Hall of Colorado and Steve Hall of Muncy. She was preceded in death by an infant daughter, Amy Snavely, in 1987. Earning her namesake, Mammy’s greatest love was her family to whom she devoted her life. She enjoyed fishing with husband, snuggling the kids, and cooking for a houseful. Mammy was an avid reader, and took great pleasure reading to her grandchildren. She also cherished the special one-on-one time with “her girls”. She was a principal and valuable part of the successful family business that she and her husband started in 1995. A memorial service will be held on Saturday, February 13, 2016, at 2 p.m. at Living Hope Fellowship, Estella, 3299 Rt. 4008, Forksville, with Reverend Robert Brown officiating. Family and friends may call from 1 to 2 p.m. that afternoon. The family will provide flowers and kindly requests donations be made to the House of Hope in Sayre: The Guthrie Clinic, Resource Development, One Guthrie Square, Sayre, PA 18840. Arrangements have been entrusted to the McCarty-Thomas Funeral Home, 119 Carpenter Street, Dushore. Expressions of sympathy may be sent to the family at www.mccartythomas.com.

Gloria Jean &#8220;Mammy&#8221; Snavely, of Forksville, PA, passed away on February 4, 2016, at Robert Packer Hospital with her loving family at her bedside. She was 62 years old. Born February 21, 1953 in Muncy, she was the granddaughter of... View Obituary & Service Information

The family of Gloria Jean "Mammy" Snavely created this Life Tributes page to make it easy to share your memories.

Gloria Jean “Mammy” Snavely, of Forksville, PA, passed away on...