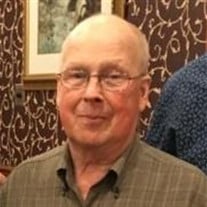 Glenn E. “Bucky” Simpson Jr., 76, of Muncy died Monday, July 29, 2019 at his home. Born May 24, 1943 in Turbotville, he was a son of the late Glenn E. Sr. and Pearl L (Beiber) Simpson. He and his wife, the former Sandra R. Holliday, would have celebrated 24 years of marriage on October 7, 2019. Glenn was a graduate of Hughesville High School, Class of 1962, and Pennsylvania College of Technology with a machinist degree. He was employed at the former GTE Sylvania for 28 years and currently owned and operated Picture Rocks Hardware for over 20 years. Glenn was a member of The Beacon: A United Methodist Church, Hughesville, Muncy Lodge #299 F. & A. M., Tall Cedars of Lebanon, and a former member of the Picture Rocks Lions Club. Glenn was an outdoor enthusiast who enjoyed hunting and fishing. He also loved antique cars and playing cards with his classmates every Friday night. Surviving, in addition to his wife, are two sons, Todd S. (Shanna) Simpson and Chad R. (Jennifer) Simpson both of Muncy; two step-daughters, Holly D. (James) Lovell of O’Fallon, IL and Laurie D. (Randy) Wells of Mill Hall; a step-son, Howard G. Rice of Picture Rocks; a sister, Kay (Jim) Pearson) of Muncy; five grandchildren; one great-grandson; five step-grandchildren; and two step-great-granddaughters. Funeral services will be held 11 a.m. Friday, August 2, at McCarty-Thomas Funeral Home, 557 E. Water Street, Hughesville, with Rev. Doug Mellott officiating. Burial will follow in Pleasant Hill Cemetery, Hughesville. Friends may call from 6 to 8 p.m. Thursday, August 1, at the funeral home where a masonic funeral service will be held at 7:45 p.m. The family will provide the flowers and suggest memorial contributions to The Gatehouse at www.susquehannahealth.org/donate. Expressions of sympathy may be sent to the family at www.mccartythomas.com.

The family of Glenn E. "Bucky" Simpson created this Life Tributes page to make it easy to share your memories.

Send flowers to the Simpson family.