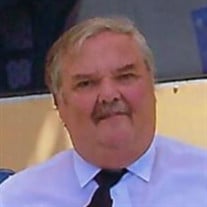 Gerald William “Jerry” Staivisky passed away on November 23, 2021. Jerry was born on May 29, 1950, at Muncy Valley Hospital and lived in Hughesville, PA. He passed at Palm Garden Long Term Facility in West Palm Beach, FL from stage four liver cancer after five months of battling his cancer. A graduate of Hughesville High School, Jerry attended Bloomsburg State College graduating with a bachelor’s degree in Education. After working briefly as a teacher, he moved to South Florida working as a manager of various businesses. Known as a person who never met a stranger, Jerry found his niche working as a driver for hire where he met a lot of interesting people with whom he was able to develop lasting friendships. A highlight in Jerry’s driving career was meeting the Yankee Baseball Team Manager. Jerry was an avid baseball fan, especially of the New York Yankees. Of course Mickey Mantle was his all-time favorite. Soon the Yankee’s manager requested Jerry whenever he needed a driver, and every Christmas gave Jerry a Yankee Baseball gift. Jerry’s favorite gift was four VIP box seat tickets to take friends to a game and attend the pre-game buffet with other special Yankee fans. As a child, Jerry enjoyed putting model cars and airplanes together and doing puzzles with the tiny pieces. He also liked playing cowboys and bank robbers. He grew up being involved with the cub scouts and boy scouts. He collected trains and Christmas houses displaying them throughout his home. To anyone who ever visited Jerry it was evident that he loved Christmas. Christmas in his home was all year long and sitting in his recliner in the evening with only the Christmas lights on was the relaxing highlight of his day. Jerry was born to John Staivisky and Charlotte (Bowen) Staivisky. He is survived by his sister, Jeanne Staivisky; nieces, Lynne Treese and Lorrie Staivisky; great-nieces, Olivia and Eliza Treese; his nephew in-law, Greg Treese; and sister-in-law, Elizabeth (Betty) Staivisky. He will now be able to reconnect with his deceased older brother John (Jack) Staivisky; his deceased older sister, Judith (Judy) Staivisky; and his deceased parents. Jerry was raised in the Catholic faith receiving all the sacraments. Jerry is also survived by members of his Florida family, as he referred to them, Mary Miller, Rebecca Dowling, Joy Miller, and Abby Dowling. Friends may say their goodbyes to Jerry at McCarty-Thomas Funeral Home, 557 E. Water St., Hughesville, on Saturday, December 4, 2021, from 10 to 11 a.m. His funeral service will be held immediately after the viewing at 11 a.m. Jerry has asked that friends not send flowers, but instead send a donation to a Cancer Research Fund/Cancer Center Fund of their choice in his name. He said he didn’t want anyone to experience living the way he was as his cancer spread. He was a trooper through it all. Expressions of sympathy may be sent to the family at www.mccartythomas.com.

The family of Gerald W. Staivisky created this Life Tributes page to make it easy to share your memories.

Send flowers to the Staivisky family.