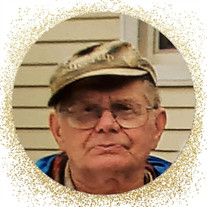 George Amos Smith Jr. (better known as Skip Smith), 84, of Eagles Mere, died, Wednesday November 4, 2020, at his home with his family by his side. He was born on July 14, 1936 near Geneva NY while his mother was visiting family and picking grapes, he was the son of the late George Amos Smith and Harriet (Houseknecht) Smith of Eagles Mere. After high school George (Skip) served three years in the army in the early 60”s. The first year in Fort Dix, New Jersey where he completed basic training and mechanic school. He then spent one and a half years in an artillery company where he was a member of a six-man team that operated a large atomic gun on the German/Czechoslovakia boarded while the Russians threatened invasion. This company was disbanded when the USA got their first nuclear missiles. George then spent the last six months of enlistment in Germany as a truck mechanic. After serving his country, George (Skip) Smith returned to his home town of Eagles Mere where he become reacquainted with Florence B. Smith and they married and purchased a home near where he grew up. He worked shortly as an Eagles Mere Borough employee and at the Rainbow Farm Estates before going to work for Marquadt Bros Lumber and Farming in Muncy Valley, PA where he worked until retiring at age 62. George (Skip) enjoyed shooting and hunting as well as just watching wildlife. George and his wife also raised several horses over the years including a colt that was born at their home. His favorite was a large work horse named Prince. He liked to grow things which included a large garden when the family was at home, but just tomato plants in recent years. He planted an apple orchard and rebuilt an apple press to use in making apple cider. He enjoyed and owned several old tractors. He liked fixing things including the tracks, cars, trucks, lawn mowers, motor cycles, and bicycles. He was a definite “cobbler” fixing things with materials he repurposed, just as his dad did before him. Chopping and stacking firewood was his favorite form of exercise, which he continued to do up until a few weeks before his death. George (Skip) and his wife, Florence B. Smith, celebrated 55 years of marriage before Florence passed in 2018. Surviving are three step-daughters, Carolyn B. (Edward) Taylor of Picture Rocks, Margaret A. Blackwell of Montoursville, and Jeannine R. (Mark) Richlin of Dushore; twelve grandchildren; and numerous great and great-great grandchildren. George is also survived by three sisters Elaine Mudrick of Eagles Mere, Carol Bigger of Selinsgrove, and Rhoda (Dan) Johnson of Newmanstown PA. In addition to his parents and wife, George was preceded in death by his parents and wife, sons George A. Smith III and John S. Smith, sister Dixie Schrader and a grandson Drew Taylor. The family will host a memorial service on Sunday November 15, 2020 at 1:00 p.m. at the Eagles Mere Community Church Laporte Ave. Eagles Mere for family and friends. Arrangements have been entrusted to the McCarty-Thomas Funeral Home, Hughesville. Expressions of sympathy may be sent to the family at www.mccartythomas.com.

George Amos Smith Jr. (better known as Skip Smith), 84, of Eagles Mere, died, Wednesday November 4, 2020, at his home with his family by his side. He was born on July 14, 1936 near Geneva NY while his mother was visiting family and picking grapes,... View Obituary & Service Information

The family of George A. Smith, Jr. created this Life Tributes page to make it easy to share your memories.

Send flowers to the Smith, family.