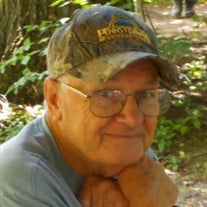 George E. Brown has been called home to our loving Father and Son, on Wednesday, April 22, 2020, at Robert Packer Hospital. He passed due to complications from Myelodysplastic Syndrome (MDS) at the age of 86. George was born on October 19, 1933, in North Towanda Township, PA to Rena Iva (Rockwell) and Harry William Brown. He was one of seven children, sadly only two others survived to maturity, James and Mary. George was the first one in his family to graduate. He graduated from Turnpike High School, a member of the class of 1952, and enjoyed keeping in touch with his classmates to the day he passed. He married the love of his life and his best friend, Lavinia Mas Cividanes, on December 18, 1954. They enjoyed 45 years of marriage before her passing on August 14, 1999. George was a member of Redeemer Church, 242 German Street, Dushore, PA. George was an active and honorary member of the Dushore Fire Company, he held the position as Asst. Fire Chief and Financial Secretary. He was a lifelong member of Future Farmers of America. An avid John Deere enthusiast and enjoyed NASCAR races, he was a Dale Earnhardt fan. Having lived on a farm, he had a great passion for farming. He enjoyed being outdoors gardening, planting, tiling, and mowing. He enjoyed his tractors and could always be found mowing and had numerous comments about his well-manicured lawn. George held many different jobs but is most known for appliance repair. He worked for two furniture and appliance stores in Dushore. In the fall of 1981, he started his own business, George E. Brown Appliance Repair. He retired in January 1996. He was known for his friendliness, and his kind and compassionate spirit. He was a gentle man that lived a simple life. He was a family historian and had written a lot about the family history. He loved his family more than anything. George is survived by three children, Joseph (Barbara) Brown, Sally (Jerry) Hawley, and Jane (Steve) Grazaitis; two grandchildren, Christopher and Mikaela Brown; his very special nieces, Cynthia, Elizabeth, Golda, Pauline, Genie, Alison, Paula, and families; his sister-in-law, Victoria (James) Nicholson and family; several step nieces and nephews; and a step sister Joanne Dunn. In addition to his wife and parents, George was predeceased by his step father, Eugene (Jake) Fulmer; his granddaughter Amber; his brother James and sister-in-law Lois Brown; his sister Mary and brother-in-law Robert Cline; his in-laws, Jose and Rosa Cividanes; his brother-in-law David; step brothers, Carl, Glenn, and Wayne (Sonny) Fulmer; and four step sisters Geraldine Pehonich, Ruth Marshall, Pauline Mulcahy and Dorothy (Dottie) Baker. God truly blessed us with a loving humble man, he was a wonderful father, grandfather, husband, son, brother, uncle, and friend. He will be dearly missed by all who knew him. In lieu of flowers donations can be made to Sullivan County Food Bank or Dushore Fire Company. Due to the restrictions from the COVID virus, a memorial to celebrate his life will be held at another time. Arrangements have been entrusted to the McCarty-Thomas Funeral Home, Dushore. Expressions of sympathy may be sent to the family at www.mccartythomas.com.

George E. Brown has been called home to our loving Father and Son, on Wednesday, April 22, 2020, at Robert Packer Hospital. He passed due to complications from Myelodysplastic Syndrome (MDS) at the age of 86. George was born on October 19,... View Obituary & Service Information

The family of George E. Brown created this Life Tributes page to make it easy to share your memories.

George E. Brown has been called home to our loving Father and...

Send flowers to the Brown family.