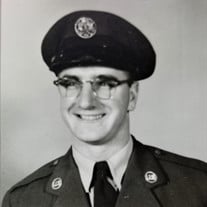 Frederick V. Sayman Jr., 91, of New Albany, died Wednesday, May 15, 2019 at his home. Born August 22, 1927 in Blakely, he was a son of the late Frederick V. Sr. and Rosa A. (Silverstrim) Sayman. He and his wife, the former Dorothy A. Arnold, celebrated 64 years of marriage on February 26, 2019. Fred was a graduate of New Albany High School, Class of 1945. Following his graduation he was drafted into the U.S. Army during WW II, and served his country honorably from 1945 to 1947. Realizing his patriotic duty, Fred re-enlisted in the U.S. Air Force during the Korean Conflict, and continued to serve his country from 1950 to 1954. While in the military, Fred was involved with many notable assignments, including guarding the Tomb of the Unknown Soldier, participating with the burial detail at Arlington National Cemetery, assisting with surveying Arlington National Cemetery, and worked as a photo developer of aerial maps used during war time. Fred was very proud of his service to his country and often shared stories of the hardships he and his fellow comrades endured defending our freedom. After returning home from the Korean Conflict, Fred was employed with GTE Sylvania for over 32 years, retiring in 1986. He was a very articulate man who could accomplish anything he set his mind to. Although Fred was proud of his military accomplishments he was also proud of his farm. He loved caring for the animals and tending to his crops. Gardening was a favorite pastime of Fred’s as well. He loved growing and caring for the various fruits and vegetables he raised and spending time outdoors with his family. Fred also enjoyed hunting, fishing, and nature. He was a member of the New Albany United Methodist Church, the American Legion Post 996, Dushore, and the VFW Post 384, New Albany. Surviving, in addition to his wife, are a son, Lloyd V. (Lorrie) Sayman of Wichita Falls, TX; two daughters, Victoria Wagner of Shippensburg, and Karen (Clair) Black of Dushore; two brothers, Irvin (Jo) Sayman of Barre, VT and Howard (Trudy) Sayman of Muncy; five grandchildren; and two great-grandchildren. In addition to his parents, Fred was preceded in death by three sisters, Betty Chapman, Esther Keeney, and Delores Cox. A memorial service will be held 11 a.m. Friday, May 31, at the McCarty-Thomas Funeral Home, 119 Carpenter St., Dushore, with Rev. Ron Dyer officiating. Burial will follow in Bradford County Memorial Park with military honors accorded by the U.S. Air Force Honors Detail. Friends may call from 10 to 11 a.m. Friday at the funeral home. Legion members are asked to assemble and pass-in-review at 10:45 a.m. Friday at the funeral home. The family will provide the flowers and suggest memorial contributions to the Sullivan County Library, P.O. Box 309, Dushore, PA 18614 or the New Albany Fire Department, P.O. Box 167, New Albany, PA 18833. Expressions of sympathy may be sent to the family at www.mccartythomas.com.

The family of Frederick V. Sayman Jr. created this Life Tributes page to make it easy to share your memories.

Send flowers to the Sayman family.