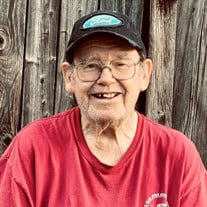 Francis X. Moll, 88, of Dushore, passed away Friday afternoon, June 18, 2021, at Robert Packer Hospital following a lingering illness. Francis was born on October 25, 1932, in Philadelphia, a son of Leo Sr. and Effie (Burrow) Moll. He graduated from West Catholic Boys High School. Francis came to work on the Shrimp Farm in Cherry Township in 1951 and decided to stay and become part of the Shrimp family when he married the love of his life, Kathleen Shrimp, on April 21, 1956. Together they raised two sons, Freddie, and Eddie, and continued the Shrimp and Moll Farm. Besides the farm activities, Francis was involved with the Cooperative Extension Service as a director, served as a County Committeeman for the Farm Service Agency, and served as a Director and Associate Director for the Sullivan County Conservation District since 1991, serving mostly as Chairman and Vice-Chairman. He was also on the Quality Assurance Board (QAB) for the Dirt, Gravel & Low Volume Roads Program. Francis was a former member of the Eastern Milk Producers and Dairy Farmers of America. He was also a member of a member of the Immaculate Heart of Mary Parish, Dushore. For many years, the Moll family provided their hay wagons for the June Dairy Month parades in Dushore. Francis enjoyed his train and village display at Christmas time, which he set around the family’s Christmas tree. Each year something new was added. He also enjoyed his farm equipment, International tractors, and especially his newest tractor which he used to rake hay. Francis and Kathleen always appreciated all those individuals who helped with the chores and especially the work with planting and harvesting the field crops. Surviving, in addition to his wife Kathleen of 65 years, are a son, Eddie and daughter-in-law, Mary Moll of Dushore; a daughter-in-law, Jane Moll of Meshoppen; a sister, Kathryn McCollum of Philadelphia; a nephew; and three nieces. In addition to his parents, Francis was preceded in death by his mother-in-law, Edna Shrimp; a son, Freddie; a brother, Leo Moll Jr.; and a brother-in-law, Charles McCollum. A Mass of Christian Burial will he held 2 p.m. Friday, June 25, at St. Basil’s Church, Dushore, with Rev. Thomas J. Major officiating. Burial will follow in Fairview Cemetery, Dushore. Friends may call from 1 to 2 p.m. Friday at the church. Memorial contributions may be directed to the Sullivan County Library, P.O. Box 485, Dushore, PA 18614; the Sullivan County Conservation District Education Fund, 9219 Route 487, Suite B, Dushore, PA 18614; or a charity of one’s choice. Arrangements have been entrusted to McCarty-Thomas Funeral Home, Dushore. Expressions of sympathy may be sent to the family at www.mccartythomas.com.

The family of Francis X. Moll created this Life Tributes page to make it easy to share your memories.

Send flowers to the Moll family.