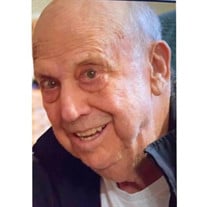 Francis “Calvin” Beinlich, age 93, passed away July 11, 2021 at Geisinger Jersey Shore Hospital. Calvin was born in Estella, PA to Raleigh and Julia Little Beinlich. After graduating from Loyalsock Joint High School in Estella he spent a brief time in the U.S. Navy and then returned to Sullivan County where he spent his entire life. He was self-employed in several businesses over the years including collecting milk from farmers and delivering to Harrington Creamery in Dushore, Beinlich Equipment & Excavating, 97 Lumber and sales of Polaris snowmobiles and Hardy outdoor stoves. Using his equipment he was always willing to assist family and friends when needed. As a member of the Sullivan County Fair Association he spent countless hours at the fairgrounds volunteering his time. He had an endless love of animals particularly horses and had a horse from the time he was 12 until in his 80s. He always said every child should have a horse or dog in their life. His love of horses was instilled in several of his children. He enjoyed attending sporting events of his children, grandchildren and great-grandchildren and especially enjoyed when he had granddaughters and great-granddaughters on the same soccer team – a sport he learned to enjoy in his late 80s and early 90s. He is survived by seven daughters, Connie(Doug) Albertson of Muncy Valley, Cathy (Steven Meschter) Beinlich of Danville, Shirley Kelchnerof Milton, Marta Beinlich of Forksville, Joanne (Del) Achenbach of Deary, Idaho, Brenda (Durwood) Whiteley of Forksville, and Faye (David Eckley) Beinlich of Muncy; two sons, David (Karen) Beinlich, and Michael (Lori) Beinlich, both of Forksville; 20 grandchildren; 27 great-grandchildren; two nephews, Rick Cott of Montoursville, and Jerry Beinlich of Colorado Springs, Colo.; a niece, Judy Epler of New Albany; and family by heart, Tim Brown of Lopez, and Ariel York of St. Louis, Mo. In addition to his parents, Calvin was preceded in death by a sister, Olga Davis; a brother, Edwin Beinlich; a son-in-law, Donald Kelchner; and a granddaughter, Heather Kelchner. At Calvin’s request, there will be no funeral or service; Instead please take a walk in his memory and enjoy the great outdoors which he loved. Arrangements have been entrusted to McCarty-Thomas Funeral Home, Hughesville. Expressions of sympathy may be sent to the family at www.mccartythomas.com.

The family of Francis Calvin Beinlich created this Life Tributes page to make it easy to share your memories.

Send flowers to the Beinlich family.