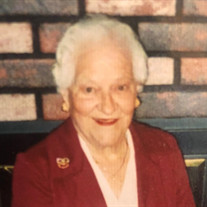 Frances A. Rosenberry, age, 91, passed away on Tuesday, January 8, 2019 at Guthrie Towanda Memorial Hospital. Frances was born February 16, 1927 in Shenandoah, the daughter of the late Gregory and Anna Wachaus Cicioni. On April 30, 1949 she married Richard Rosenberry. They were married for 57 years before his passing on October 6, 2006. Being a proud Republican, and never missing to vote at each election, Frances was honored into the Voter’s Hall of Fame. Frances was a graduate of Dushore High School, class of 1946. She loved her class reunions and spending time with her classmates, especially when it was held at Mildred Old Home Day. Frances loved to take pictures and write all the details on the back. She also enjoyed making scrapbooks from articles and pictures published in the Sully of family and friends. She enjoyed watching Family Feud and Cash Cab and every Saturday night The Lawrence Welk Show and the Pennsylvania Polka’s. Her life long career was cleaning homes and she enjoyed this for 32 years. Surviving are her loving daughter, Diane Murray and son–in–law, Jerry Murray of Dushore; two granddaughters, Shannon and Kevin Clark of Towanda, and Janine and Sid Alpaugh IV of Pennsdale; four great–grandsons, twins, Swayze Alpaugh V and Colby Alpaugh, Owen Clark, and Landon Clark; a brother, Rudy Chick of Muscatine, Iowa; and many nieces and nephews. In addition to her parents and husband, Frances was preceded in death by her son, Dale Richard Rosenberry, and a sister, Eleanor Coleman. Funeral services will be held at 12 p.m. Friday, January 11, at the McCarty-Thomas Funeral Home, 119 Carpenter St., Dushore, with Rev. Ron Dyer officiating. Burial will follow in the Colley Cemetery. Friends may call from 11 a.m. to 12 p.m. Friday at the funeral Home. Expression of sympathy may be sent to the family at www. mccartythomas.com.

Frances A. Rosenberry, age, 91, passed away on Tuesday, January 8, 2019 at Guthrie Towanda Memorial Hospital. Frances was born February 16, 1927 in Shenandoah, the daughter of the late Gregory and Anna Wachaus Cicioni. On April 30, 1949 she... View Obituary & Service Information

The family of Frances A. Rosenberry created this Life Tributes page to make it easy to share your memories.

Frances A. Rosenberry, age, 91, passed away on Tuesday, January...

Send flowers to the Rosenberry family.