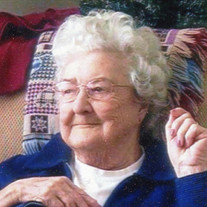 Frances McKee McCoy, 89, of Hughesville, died Saturday, October 7, 2017 at Williamsport Regional Medical Center. She was the widow of William C. McCoy who died on July 4, 1995. They were married on April 18, 1952. Born April 24, 1928 in Muncy Valley, she is the daughter of the late Maurice J. and Naomi (Myers) McKee. She attended Trinity United Methodist Church, Pennsdale. Frances was an accomplished seamstress and enjoyed quilting and sewing. Surviving are two daughters, Debra M. (R. Donald) Waltz of Hughesville, Noreen M. Finkler of Hughesville; three grandchildren, Dusteen (John) Spoon, Desirree (Arthur) Fetterman, William Finkler, all of Hughesville; three great grandchildren, all of Hughesville; and a sister, Nancy Aunkst of Hughesville. In addition to her parents and husband, she was preceded in death by a son, Robert McCoy; brothers James, Robert, William, and Howard McKee; and a sister, Merb Capula. Funeral services will be at 11 a.m. on Thursday, October 12 at McCarty-Thomas Funeral Home, 557 E. Water Street, Hughesville, with Kathy Burkhart officiating. Burial will be in Muncy Cemetery. Visitation will be from 6 to 8 p.m. on Wednesday at the funeral home. In lieu of flowers, memorial contributions may be made in Frances’ name to North Central Sight Services, 2121 Reach Rd, Williamsport, PA 17701. Expressions of sympathy may be sent to the family at www.mccartythomas.com

The family of Frances McKee McCoy created this Life Tributes page to make it easy to share your memories.

Send flowers to the McCoy family.