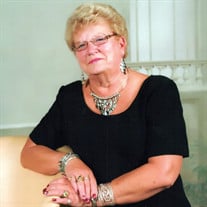 Fonda Jane Stamets, 73, of Montgomery, passed away on Sunday, April 11, 2021 at UPMC Susquehanna Williamsport. Fonda was born July 3, 1947 in Williamsport and is the daughter of the late Maurice Elwood and the late Mary Jessie (Muse) Bastian. Fonda married Robert K. Stamets on February 10, 1973 and shared 39 years of marriage. Fonda's first job out of school was with Avco – Lycoming Engines of Williamsport and after over 40 years working for Shop Vac she retired in August 2012 as an accounting supervisor. After retiring, Fonda worked doing home health care until the time of her death. She was an active member of the Beta Sigma Phi Sorority. She loved going to the beach, spending time with her dogs, reading, traveling, and fishing. Her dream was to go deep sea fishing. Fonda was also a member of St. John Lutheran Church "Brick Church" of Montgomery. She is survived by a sister: Sara Fae (Gary) Bastian - Hmurcik of Kirkwood, NY and by a nephew: Chandler Z. Hmurcik, many cousins, and her dear friend, Sharon McCarty. She also is survived by her most precious fur legged “children”, Dahlia, Hooter, Abby, Penny and Nosy. In addition to her parents, Fonda was predeceased by her husband Robert K. Stamets on June 3, 2012. Family and friends are invited to attend Fonda’s 3 p.m. graveside service on Friday, April 16 at St. John Lutheran "Brick Church" Cemetery, Montgomery, with Pastor Doug W. Mellott officiating. In Fonda’s memory, memorial contributions may be made to the SPCA 2805 Reach Rd. Williamsport, PA 17701 or to Camp Courageous 12007 190th St. Monticello, IA 52310. Arrangements have been entrusted to McCarty~Thomas Funeral Home, Hughesville. Expressions of sympathy may be sent to the family at www.mccartythomas.com.

Fonda Jane Stamets, 73, of Montgomery, passed away on Sunday, April 11, 2021 at UPMC Susquehanna Williamsport. Fonda was born July 3, 1947 in Williamsport and is the daughter of the late Maurice Elwood and the late Mary Jessie (Muse) Bastian.... View Obituary & Service Information

The family of Fonda Jane Stamets created this Life Tributes page to make it easy to share your memories.

Fonda Jane Stamets, 73, of Montgomery, passed away on Sunday,...

Send flowers to the Stamets family.