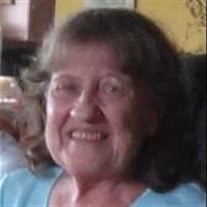 Floye N. Shaner, 78, of Hughesville, died Thursday, April 30, 2020 at her home. Born August 21, 1941 in Muncy Valley, she was a daughter of the late Willis and Mabel (Chestnut) Myers. She and her husband, Ned K. Shaner, would have celebrated 63 years of marriage on October 23, 2020. Floye attended the former Sullivan Highland School, Sonestown, and spent her life as a loving, guiding, caring, wife and mother. In her spare time she enjoyed cooking, baking, gardening and preserving the harvest. When Mother’s Day would come around her children would usually get her flowers which she would tend to and sit on the porch to enjoy during the summer afternoons and evenings. She enjoyed feeding the hummingbirds and would do so all summer long, often having to refill the feeders more than once a day. At one point she had over 25 zooming in and out around the picture window, providing her with hours of entertainment. Floye enjoyed going to carnivals and visiting with family and neighbors. She also enjoyed walking; walking two miles a day for over 30 continues years. On one occasion Ned had to follow her with the car, lighting the way at 3 a.m., so she wouldn’t miss a single day. Surviving, in addition to her husband, are four daughters, Rhonda C. (Leonard) Minier of Unityville, Lisa L. (Kenny) Statts of Muncy, Lori F. (Billy) Miller of Hughesville, and Nedra N. (Gerald Swank) Burkhart of Muncy Valley; two sons, Rodney L. "Pud" (Sue) Shaner and Nathan K. (Brandy) Shaner, both of Hughesville; two sisters, Virginia (Wayne) Arthur of Hughesville and Rebecca (Joe) Wisniewski of Philadelphia; two brothers, Gordon (Shirley) Myers of Unityville and Vaughn Myers of Muncy Valley; 10 grandchildren; and 10 great-grandchildren. In addition to her parents, Floye was preceded in death by a sister, Shelby Kepner and a grandson, Albert M. Burkhart. Funeral services will be held privately at the convenience of the family with burial in Mt. Zion Cemetery. Arrangements have been entrusted to McCarty-Thomas Funeral Home, Hughesville. Expressions of sympathy may be sent to the family at www.mccartythomas.com.

Floye N. Shaner, 78, of Hughesville, died Thursday, April 30, 2020 at her home. Born August 21, 1941 in Muncy Valley, she was a daughter of the late Willis and Mabel (Chestnut) Myers. She and her husband, Ned K. Shaner, would have celebrated... View Obituary & Service Information

The family of Floye N. Shaner created this Life Tributes page to make it easy to share your memories.

Send flowers to the Shaner family.