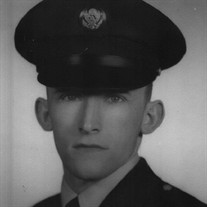 Eugene K. Dieffenbach, 76, of Dushore, died Thursday, February 23, 2017, at Dar-Way Nursing Home, Forksville. Born September 24, 1940 in New Albany, he was a son of the late Keith R. and Ruth V. (Norton) Dieffenbach. Gene was a graduate of the former Loyalsock High School, Class of 1961. He then served his country honorably in the U.S. Army during the Vietnam War and was stationed in Germany. He spent most of his high school years living on the Norton farm, and enjoyed hunting and fishing, especially bass fishing. Surviving are two daughters, Elizabeth Jamerson and Ruth (Joe) Kern, both of NJ; a sister, Audrey G. Eberhardt of Forksville; two grandsons, Marshall and Seth Jamerson; his faithful dog, Snowball; and several nieces and nephews. Gene was preceded in death by his wife, Charlotte, and a son, Keith Dieffenbach. The family will hold a memorial service on Friday, March 3, at the Sullivan Terrace Community Room, 135 N. German St., Dushore, with Rev. William J. Hargenrader officiating. Burial will be held privately in First Baptist Church Cemetery, Salem, NJ. Arrangements have been entrusted to the McCarty-Thomas Funeral Home, Dushore. Expressions of sympathy may be sent to the family at www.mccartythomas.com.

The family of Eugene K. Dieffenbach created this Life Tributes page to make it easy to share your memories.

Send flowers to the Dieffenbach family.