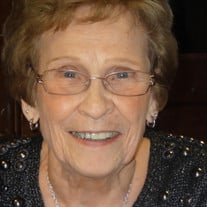 Ernestine Leona Dieffenbach was born in Blossburg, PA on January 7,1929 to Andrew and Mary (Luke) Harzinski of Arnot, PA. Ernestine was one of 7 siblings, and attended school in Arnot and transitioned and graduated from Blossburg High School. She met her husband Rex Wayne Dieffenbach in Mansfield, PA and they were married in 1947 in Arnot. They built a home in 1951 & settled in his hometown of Dushore, PA. They parented four sons and in addition to being a mom, Ernestine worked outside their home until she decided to stay home and care for Rex’s Mother, Adelia. At this time, she set up a Ceramic shop in their store across the street from their home and taught ceramic classes there for many years. As Rex was a member of the Masonic Lodge, Ernestine was also active in the Eastern Star in Towanda. She was extremely devoted to her family— a trait that became even more enhanced as her family expanded. Ernestine loved knowledge and was very dedicated in teaching her children and grandchildren... when asked a question she would often grab her beloved World Book and guide us in the search for the answer to our question. She loved to read and loved her Dushore Library. Ernestine loved watching & feeding her birds and hummingbirds and always had a reference book beside her window to identify newcomers. She always admired her flowers and she & Rex grew amazing flower and vegetable gardens. She was an amazing cook and baker and would always open her doors & dining table to family, friends and neighbors. Ernestine was an active member of St. Paul’s Methodist Church in Dushore, and her faith gave her strength and peace to raise four sons and enhanced her love for church and Country. We, as her family, were always so thankful for her unending silent yet fervent prayers. In searching for words that would accurately describe this amazing woman... Ernestine was strong & determined, meticulously hard working, proud and classy, kind & loving, thoughtful & supportive. She passed on May 4,2021 during a brief stay at the Bradford County Manor. Ernestine was pre-deceased by her parents, her husband Rex, her in-laws Lewis & Adelia (Eberlin) Dieffenbach, four of her siblings- Edwin, Floyd, Joseph Harzinski, and Veronica (Bates), also sister-in laws Theresa, Stacia, Isabelle, Shelvajean, brothers-in-laws Richard Bates and Harold (Doc) Dahlgren, previous daughter-in-law Maureen (Gerrity) Dieffenbach & nephew Paul Harzinski. She is survived by her four sons, Wayne Lewis (Wanda), Gary Rex (Nancy), Bruce Raymond (RaeLynn), and Mark Andrew (Robin), siblings Ray Harzinski, and Eleanor Dahlgren. Grandchildren: Eric (Sarah) Dieffenbach, Tonya (Drew) Barrett, Joanne (Jeremy) Dieffenbach, Daniel (Dawna) Dieffenbach, Scott (Tina) Dieffenbach, Jared (Victoria) Dieffenbach, Jamie Dieffenbach, Blake (Kim) Dieffenbach, Andrew (Lindsey) Dieffenbach, Mitzi (Luke) Herron. She is also survived by 25 great grandchildren as well as nieces and nephews and good friends. As a wife, mother, grandmother, aunt, and friend, Ernestine Dieffenbach was ‘simply the best’. Arrangements have been entrusted to McCarty~Thomas Funeral Home, Dushore. Expressions of sympathy may be sent to the family at www.mccartythomas.com.

Ernestine Leona Dieffenbach was born in Blossburg, PA on January 7,1929 to Andrew and Mary (Luke) Harzinski of Arnot, PA. Ernestine was one of 7 siblings, and attended school in Arnot and transitioned and graduated from Blossburg High School.... View Obituary & Service Information

The family of Ernestine L. Dieffenbach created this Life Tributes page to make it easy to share your memories.

Ernestine Leona Dieffenbach was born in Blossburg, PA on January...

Send flowers to the Dieffenbach family.