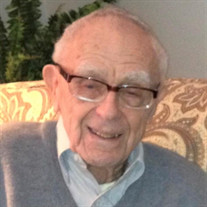 On April 10th, Elwood C. Guisewhite entered into the greater presence of our Lord. Born on November 14, 1924, he was married to Ethel H. (Wallis) Guisewhite for 64 years until the time of her death in March 2015. Elwood is survived by daughters Cathy Guisewhite (David) Gelatka, of Lititz, Gail A. Guisewhite, of Hughesville, granddaughters, Brooke Gelatka (Frank) Magni, Mary Clare Gelatka (Ted) Harris and two great grandsons, Carter and Cameron Magni. He was a member of Christ United Methodist Church in Hughesville. Elwood was a graduate of Hughesville High School, Class of 1942. In 1943, he was drafted into the United States Army and was trained as a Combat War Medic. He served troops in the Pacific Theatre (Philippines) where he earned the rank of Sergeant. As a result of his heroic actions, Elwood was decorated with the Silver Star Medal and Purple Heart Medal. In December of 1949, he enlisted in the Army Reserve Corps stationed in Europe and was honorably discharged in February 1953. Elwood was employed for 40 years by Sprout, Waldron and Co. of Muncy, where he worked as a talented machinist. During his employment, he was a member of the Quarter Century Club. During his retirement, Elwood and his wife enjoyed vacationing with family and friends. These trips included countless visits to Lititz to enjoy watching their granddaughters grow up. Elwood was a past Post Commander and Sergeant at Arms for The American Legion, Glenn Sharrow Post 35. He participated in many military funerals and rarely missed marching in the annual Memorial Day Parade. He was a lifetime member of the VFW. Elwood was fond of reminiscing about his time and experiences during World War II with family and friends. He was often called upon to speak to local Boy Scout troops, elementary school classes and local library gatherings. Elwood enjoyed spending time with his family. His humor was quick and contagious. He was especially fond of sitting on his back porch and visiting with neighbors and friends. He was kind, generous and selfless in his quiet humble way. He will be missed by all who were lucky enough to know him especially his family. The family would like to extend gratitude and thanks to the staff of UPMC, Williamsport and The Gatehouse at Divine Providence Campus, UPMC Williamsport. Due to COVID-19, a memorial service is not possible at this time. Memorial and graveside services with military honors are tentatively scheduled for July 25th, 11am, at The Beacon United Methodist Church, Hughesville, Pa. The family will confirm details at a later date. To honor Elwood, donations may be made to The Gatehouse, payable to Susquehanna Health Foundation 1001 Grampian Blvd., Williamsport 17701 and to The American Legion Glenn Sharrow Post 35 of Hughesville, 76 N. Main Street, Hughesville 17737. Arrangements have been entrusted to McCarty~Thomas Funeral Home, Hughesville. Expressions of sympathy maybe sent to the family at www.mccartythomas.com.

On April 10th, Elwood C. Guisewhite entered into the greater presence of our Lord. Born on November 14, 1924, he was married to Ethel H. (Wallis) Guisewhite for 64 years until the time of her death in March 2015. Elwood is survived by daughters... View Obituary & Service Information

The family of Elwood C. Guisewhite created this Life Tributes page to make it easy to share your memories.

On April 10th, Elwood C. Guisewhite entered into the greater...

Send flowers to the Guisewhite family.